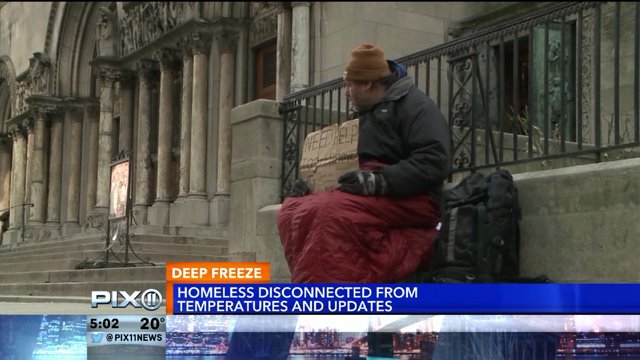 NEW YORK (PIX11) -- For a complete stranger, it is not easy hearing Robert Feldscher's story in front of St. Bart's Church. "It's cold out here. My feet are froze."

The 44-year-old has spent a good portion of the last two years on the streets. Seconds after meeting him, one realizes how simple information like a weather forecast eludes him. When asked if he knew how cold it was on Monday, Feldscher simply responded, "No I don't."

Nonetheless, there he was near the corner of Park and 50th, nestled in the shadows of one of the world's most luxurious residential buildings. Around him various financial institutions while just a half-a-block away the posh Waldorf Astoria. The Illinois native wasn't pestering anyone for money. He was simply holding up a sign with hopes for kindness to find its way inside of his Chicago Blackhawks hat. "I'm trying to get life back together. I just need a foot in the door. I don't want to do this the rest of my life. It stinks. It's cold out here."

When PIX11 News asked him why he wasn't trying to stay warm inside somewhere or at a shelter, Feldscher said he would eventually ride the subway for a few hours to get out of the cold. However, he also added that a shelter to him, is not an option, "Cause they rip your stuff off. I already had my stuff stolen and all that. It's hard enough to get stuff. So I am just going to stay out here."

Krivich has worked at the Bowery Mission the last twelve years and currently serves as the Director of Operations.  "Today is one of our most intense days," Krivich said.

Krivich has seen a variety of challenges at the Bowery Mission. To combat the below average cold the facility kept its doors unlocked all night to welcome anyone while attempting to serve heartier meals. However, the biggest task he says is the one that doesn't get resolved over the course of a day. "The larger numbers are indicative of the increase in homelessness in New York City and the challenge for us is that it's easy to serve a quick meal or provide shelter overnight but we want to try and build into a long term solution, offering opportunities that are far greater than just a meal."

Krivich adds that a disturbing trend in recent years has been the site of entire families, including children, who walk through his doors hoping for a hot meal and some assistance.