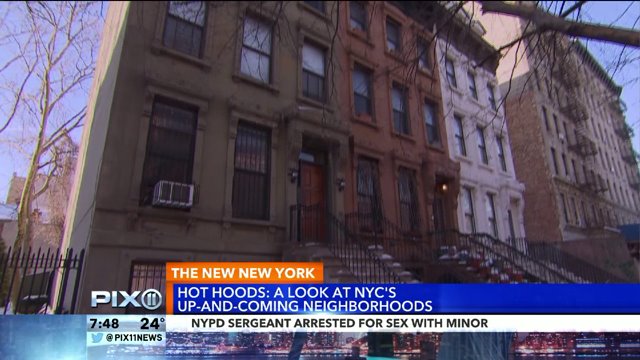 NEW YORK (PIX11) -- Finding the perfect real estate in New York City is as much about timing as it is location.

Sharnee Lance is a new single mom facing an issue that so many New Yorkers face: the need for more space when kids are born and the desire to find the right neighborhood for their new bundle of joy.

Lance lived in Clinton Hill for 20 years, but outgrew her space.

And so began the search for a neighborhood to buy in, before the prices skyrocketed. Lance scoured Bed-Stuy, Clinton Hill, Fort Greene, Flatbush and Canarsie.

Real estate broker Jamella Swift said the up-and-coming neighborhood to watch in Brooklyn is Ocean Hill, which she called “on the next horizon.”

The area is nestled between Bed-Stuy, Bushwick and East New York. It’s 20 minutes from Manhattan and residents have the choice of C, L or J trains. A one-bedroom there is going to for $1,600.

But Lance was looking to buy, so she headed to Bushwick. Brokers said the neighborhood is affordable, gives residents a lot for their money and three train lines come through the area.

For example, an 837-square-foot condo with two bedrooms, one bath, a parking space and storage unit is on for the market for $565,000.

“Even though it’s becoming a trendy neighborhood, it has the classic Harlem charm,” Swift said. “Beautiful townhouses with nice detail and history. It has rowhouses and newer buildings.”

Celebrities are among Harlem’s newest residents, including “How I Met Your Mother” actor Neil Patrick Harris who bought a massive townhouse in the neighborhood. Similar homes have started at $1.5 million, depending on the number of rooms, Swift said.

Not quite in the price range for Lance, who was looking for something affordable. So we went further north, to a growing section of the Bronx: Soundview.

In his State of the City address, Mayor Bill de Blasio said Soundview will be one of the stops for a proposed ferry. Soundview Park will be redesigned.

So Lance had some options to choose from. She ultimately went with a $700,000 townhouse with a new kitchen, four bedrooms and four bathrooms in Ocean Hill, Brooklyn.

“It’s up-and-coming, which makes me think it will bring great diversity for my daughter, and it’s near a commercial district,” she said. “I like being near shops and stores.”