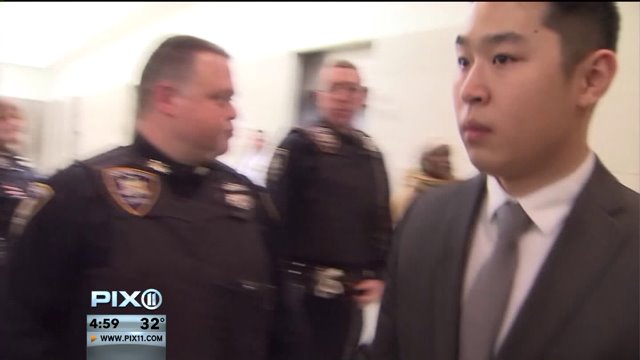 A NYPD officer indicted in the fatal shooting of Akai Gurley inside a Brooklyn housing complex stairwell was formally charged Wednesday.

BROOKLYN (PIX11) -- A NYPD officer indicted in the fatal shooting of Akai Gurley inside a Brooklyn housing complex stairwell was formally charged Wednesday.

Liang shot 28-year-old Gurley Nov. 21 as he walked in a dimly lit stairwell inside the Pink Houses in East New York with his girlfriend. Liang was with another officer on a "violence reduction detail" when he says his weapon "accidentally discharged."

Liang faces 15 years in prison if convicted of the top charge.

"Shortly after the tragic death of Akai Gurley in a stairwell of the Louis H. Pink Houses in East New York, Brooklyn, I promised to conduct a full and fair investigation to get to the bottom of what happened that night," Thompson said in a statement. "I can now report that the District Attorney’s Office has completed a thorough investigation into this matter."

PBA president Patrick J. Lynch said that Liang “deserves the same due process afforded to anyone involved in the accidental death of another.”  Lynch added, “The fact the he was assigned to patrol one most dangerous housing projects in New York City must be considered among the circumstances of this tragic accident.”