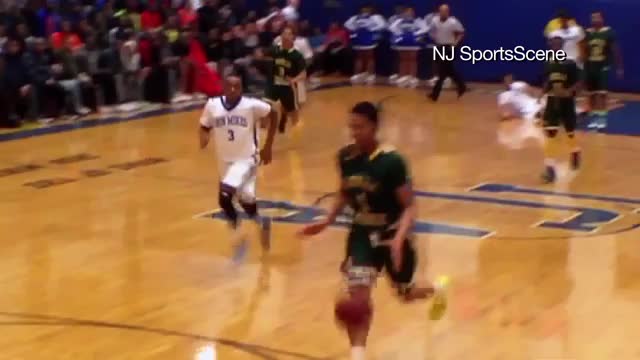 ROSELLE (PIX11)-- "It became a reality for me in 8th grade," Isaiah Briscoe said. One night, I was up, I couldn't sleep and I was thinking that I really could be good at the game of basketball."

Isaiah Briscoe is not your normal high school student.

"Ever since 8th grade I've pretty much been treated like a rockstar," he said.

While most of his classmates at Roselle Catholic High School in New Jersey are thinking about their next test, the nation's top-ranked high school point guard is thinking about testing his skills in the NBA.

"If the NBA, GM's, and coaches think you're ready to go play at the next level, by all means, go get drafted," Briscoe said,

But first, Briscoe will have to spend at least one year in college. Recently, the basketball phenom decided to forgo offers form local schools like Rutgers and St. John's University.

"It was hard to say no [because[ I got a great fan base here at home, but I gotta do what's best for me," he explained.

He announced on National Signing Day that he will attend Kentucky University.

"Growing up as a kid and seeing all the great point guards in the NBA, I want to be the next one," Briscoe said. "I feel like Coach Calipari gives me the best chance."

"He's going to be a leader wherever he goes in whatever he does," Dave Boff said.

Dave Boff has coached Briscoe for two seasons. He says the point guard hasn't let the hype go to his head. The senior still shows up early for practice and is usually the last to leave.

That hard work has translated into success for the team on the court. Earlier this season, the Lions were ranked number one in the state and number two in the country.

"It's cool to play in front of the packed crowds," Boff said. "It's been great for our school with all the exposure and the kids certainly enjoy it."

Among those in the crowd cheering the team on is Briscoe's mother Henrietta, or Rada for short.

"We just try and make sure he enjoys his life as a young adult now, but he's still my baby," Rada Hemingway smirked.

But with so much attention, Briscoe says sometimes it's tough to be just another teenager.

"Eyes are always on me, everything I do, or whatever is judged," Briscoe said.  "I miss being able to go out with my friends and have fun, but then again, it's a business and this is what I want to do with my life, so I have to sacrifice."

"Growing up you know I was short, I was chubby."

His skill set was shaped on the courts of Newark, battling a sister who played college ball and Syracuse then overseas.

"She always says don't forget you was my waterboy growing up, so she's got some jokes," Briscoe said.

And a dad who's in the Hall of Fame at Stockton University.

"When his dad is hard on him, mommy comes in, soothes him over and let's him know, mommy knows you're always doing your best, so you just continue to do your best," Hemingway said.

This year doing his best means checking of a list of goals Briscoe and his dad posted on the fridge before the season. He;s already checked off most of the boxes. Like being the number one ranked point guard and becoming a McDonald's All-American. But Briscoe's biggest goal is one he won't be able to accomplish on his own: winning the New Jersey Tournament of Champions.

"One thing that we have to understand is that we're going to get everybody's best game," Briscoe said. "We just have to remain humble."

And if his career continues on its current path, remaining humble might Briscoe's biggest challenge.