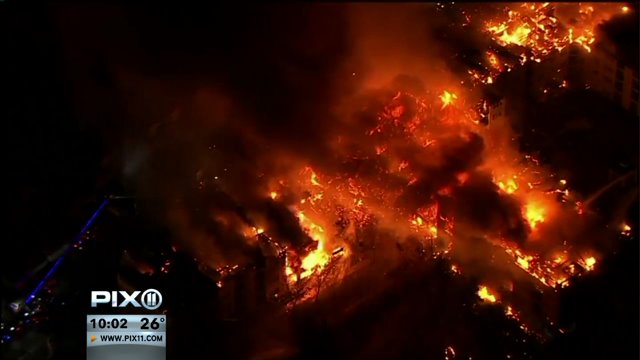 After a fire at a luxury apartment complex left dozens homeless, PIX11 took a closer look at lightweight building materials -- and why they`re legal.

“If the smoke is moving faster than you can, you have been warned!”

Edgewater Fire Chief Thomas Jacobson says after pulling up to the Avalon Apartment complex on that cold afternoon last month, “There were 276 units, I believe that were gone in a matter of two hours,” said Chief Jacobson.

He immediately realized what was burning. The Chief also knew he had very little time to get everyone out safely - before it was too late.

“You can walk on a piece of carpet covering truss floor. It can be burned out underneath, and the only thing from holding you from falling through is that piece of carpet.”

Take a look at the engineered I-Beam.

Just a few minutes after ignition, it began to burn straight through with alarming speed.

The cinder blocks, weighing much less than a firefighter crawling on his knees, under thick smoke, of a burning building, fell into the fire.

“Unlike dimensional lumber, they’re very, very straight because they’re manufactured in a controlled environment. it’s a good product, but it does burn a lot faster than conventional lumber,” said Doddridge.

The traditional lumber held up for several more minutes, theoretically enough time to rescue people from the flames in a real fire.

What’s perhaps most disturbing about our results in the wake of the tragedy in Edgewater, is this style of construction remains completely legal and up to code in New Jersey and beyond.

"I mean look, wood is wood. Wood burns, let’s face it. It’s flammable. But preventing that fire - containing that fire, making sure that the fire doesn’t spread by the proper installation of fire stopping, fire stopping, that king of thing, is what needs to be - I think - more controlled,” said Doddridge.

Despite our results, Justin Mihalik, newly elected President of the New Jersey chapter of the American Institute of Architects, says manufactured wood joists and other lightweight construction techniques are immensely popular for several reasons.

For starters, they are less expensive, more environmentally friendly and allow developers to create longer spans, for larger rooms.

“We use many different types of materials. Again, we’re focusing on lightweight construction. But for any type of material that goes into the building, the codes takes that material into consideration,” said Mihalik.

“The building code is a minimum. It’s a minimum. We can always go above. “In residential homes, there aren’t too many. But one thing is sprinklers. Again, what it boils down to, is how much does somebody want to pay for a house?” said Mihalik.

The International Code Council - a non-profit membership association -develops and releases - every three years, the building and fire codes adopted by states and towns across the country.

A spokesperson for the NJ state Department of Community Affairs says the state is just now in the process of upgrading from the 2009 Building code and the agency’s website indicates New Jersey still operates under the 2006 Fire Code.

“The particle board is loaded with glue, and it burns real fast once it gets ignited, it’s like pouring gasoline on it,” said Chief Jacobson.

Chief Jacobson has been outspoken in his opinion, that generally speaking - lightweight construction and use of manufactured building materials - played a major role in allowing small fires to morph into wild infernos.

But again - this is all legal.

So is the problem with codes that are too lax?

The fact of the matter is -- and Chief Jacobson acknowledges this -- forcing developers to use stronger, more fire-proof materials, like good old fashioned traditional lumber, or even steel and concrete, to build new homes and apartment complexes would in turn burn up their profits.

“Well, I don’t’ know what they’re profit margin is. But if they take a little less profit and put a little bit more quality into them, and made them a little bit safer. Instead of making x amount of dollars - make little bit less, and feel good about it,” said Chief Jacobson.