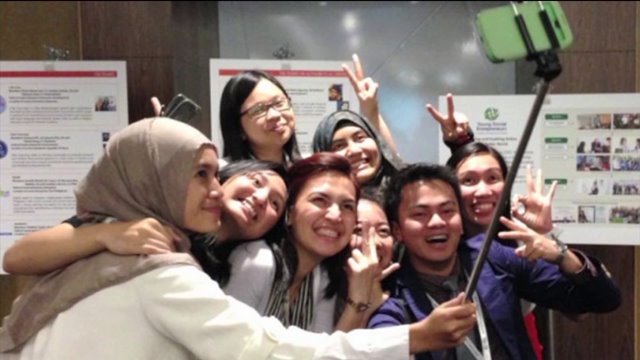 The report says that selfie addicts have traits related to narcissists and psychopaths.

Museums across the nation are banning selfie sticks for fear visitors may injure each other, or damage artifacts. (ED JONES/AFP/Getty Images)

(PIX11) — Theme parks and stadiums all over the world have already banned ‘selfie sticks’ — and now the Guggenheim, MoMA and Frick museums in New York City have also outlawed the devices.

It’s easy to understand the disdain for selfie sticks — they are long metal poles that attach to bluetooth-enabled smartphones, and can easily whack others in the face, or, possibly worse, destroy priceless art in the name of Instagram likes.

In New York, the device is already banned from the Museum of Modern Art, Smithsonian’s Cooper-Hewitt Design Museum, the Guggenheim, Frick and LES Tenement Museum, to name a few.

No flash, no comercial photo, no selfie-stick BUT SELFIES ARE FINE "Shootbklyn: My kind of place…. http://t.co/hqH28yo0Gi" #MuseumSelfie Day

MoMA spokeswoman explained to Mashable that camera extensions are not allowed: “Tripods, selfie-sticks and other devices are not permitted.”

The Brooklyn Museum says the ban is “because of concerns that visitors could bump into art or other visitors.”

The Metropolitan Museum of Art is still considering the ban, but no decision has been made.  Sree Sreenivasan, chief digital officer at the Met told Mashable:

“I am pro-selfie, just not pro-selfie stick … I’m worried about visitor safety and protecting our art. So we are working with visitor services and security to consider all our options.”

They've already been banned in notable institutions across the nation, including, The National Gallery of Art, Dallas Museum of Art, Rhode Island School of Design, Smithsonian's National Air and Space Museum, Boston’s Museum of Fine Arts and the indoor galleries at California’s Getty Center and Getty Villa forbids them.

Theme parks, stadiums and other venues are also considering banning selfie sticks too. For example, Six Flags no longer allows them on rides.

Major British venues have also banned the selfie sticks -- they are outlawed at London's O2 Arena, the SSE Wembley Arena and the O2 Academy Brixton.

A spokeswoman for Arsenal Football Club, whose stadium houses 55,000 -- 60,000 fans nearly every weekend during the season, says “It was viewed that the selfie sticks can be used as an offence weapon.”

In South Korea, the devices were decided to be "communication equipment," and must be tested and certified.

Anyone selling un-certified selfie sticks faces 3 years in prison or a $27,000 fine.