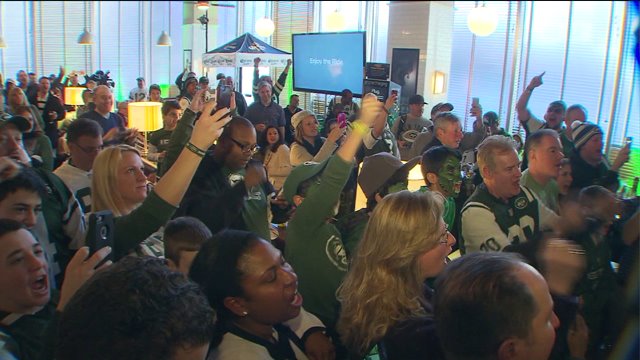 MIDTOWN (PIX11) -- New York Jets fans may have been disappointed in the past few seasons, but they still found something to celebrate about, despite their obvious absence from Super Bowl XLIX.

The beloved Gang Green came out to Lugo Cucina in Midtown in full force Saturday to show their true colors. There was even a sighting of a Santonio Holmes jersey!

During a question-and-answer session with quarterback Geno Smith, the number one question was: what does he think of new coach Todd Bowles?

"He's great, and I look forward to working with him," Smith said, adding that the new coach has made it clear that he's made no decision on who will start at the quarterback position next season.

However, Smith said he understands the dynamics of a new coach, new system and no guarantees.

"We have a new coach," he said. "It's too quick to make decisions on the quarterback situation right now.

It's Super Bowl weekend, after all, and the Jets brought their only connection to a championship: former running back Emerson Booser, who was a member of the 1969 championship team.

Booser said he knows it's going to take much more than a new coach to turn the team's fate around, but he supports Bowles.

"They need help in getting the right players on this team," he said.

Although Gang Green's left out of this race, it's the hope of every fan sporting the color that they'll soon have something to cheer about on Super Bowl Sunday.