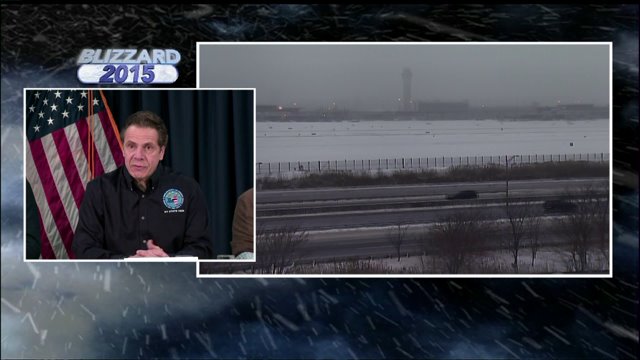 NEW YORK (PIX11) -- The tri-state started to come back to life Tuesday as governors lifted travel bans demanded by a dangerous winter storm that dumped more nearly 2 feet of snow on some areas.

Suffolk County's travel ban has also been lifted, though residents are urged to stay indoors as that area has felt the brunt of the storm and will continue to be pelted by snowfall until at least midday Tuesday.

Within seconds of the announcement, PIX11's cameras spotted cars driving down a snowy Second Avenue near East 42nd Street.

Interstate 84 and the New York State Thruway have also reopened, the governor said.

"I am asking everyone in NJ who doesn't have to drive this morning please don't," Christie said in a tweet. "And those that do, please drive slow."

At a morning news conference, Cuomo reiterated that plea, saying all non-essential travel should be avoided and warning residents that beneath the snow is a dangerous layer of ice.

New York City subways will resume service starting at 9 a.m. and by noon are expected to be running on a Sunday schedule, the governor said.