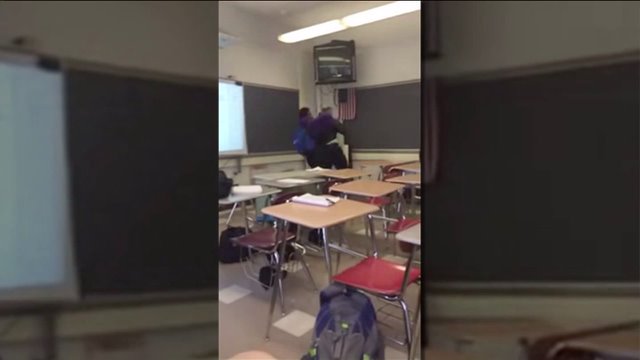 A ninth grader was caught on camera attacking a teacher in the middle of the day.

PATERSON, N.J. (PIX11) -- A ninth grader at John F. Kennedy High School in Paterson, N.J. was arrested Friday after police say he attacked his teacher and slammed him to the floor in the classroom.

All because of a cell phone.

The attack, captured on video, shows the teen slamming the 62-year-old teacher to the floor in front of other students in an effort to get his cell phone back on Thursday.

David Cozart, principal of operations at JFK, said the incident began when the teacher confiscated the phone from the student.

The 23-second video shows the 16-year-old with his arms wrapped around the teacher, knocking him into an empty desk. The student then wrestles the teacher across the front of the classroom before slamming him to the floor.

The teen then reaches down and takes something from the teacher before breaking away when someone in the classroom yelled,  “Security!”

City school officials confirmed to New Jersey.com that criminal charges have been filed against the student, who has been suspended from school.

The student is charged with assaulting a teacher in a classroom.

District officials have not revealed the name of the teacher or student.

The student has been suspended and will receive home instruction for now.

“What strikes me is that the teacher never even defended himself,” said Lee McNulty, a retired JFK teacher who has been vocal recently with criticism about violence and disorder in the high school. “That just shows how much teachers are afraid of losing their job.”