West Elm receives backlash from ‘Made in Brooklyn’ line 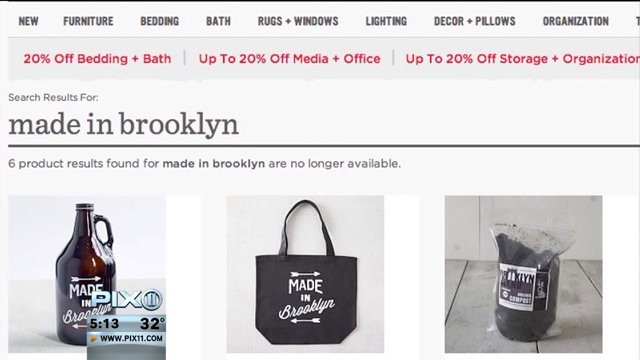 The retailer`s `Made in Brooklyn` line was actually made in China, which has sparked some backlash against the company.

BROOKLYN (PIX11) -- Forget Coca-Cola or Apple, right now Brooklyn is one of the biggest brands in the world -- the name is on everything including clothing and beer.

The Brooklyn Paper discovered the manufacturing mishap and noticed the t-shirts, bags, and beer growlers were actually made in other states, and in some cases, even China.

"People don't really pay attention," said Delen Parsley of Ocean Hill.  "You know, they just read what's on the shirt and they take it for face value.  But if it ain't real and it ain't made in Brooklyn, I don't think they should do that.  I think there should be a law against that."

But either way, people who live in Brooklyn say it's unclear and seems fake in a borough that prides itself on being real.

"It’s incredibly important to us to be transparent with our customers about where all our products are made," said West Elm's VP of Brand Marketing Abigal Jacobs. "The hangtags on these products and the information provided on our website specified their country of origin. The tagline – Made in Brooklyn - was meant to be a nod to the potential contents: the beer in the growler, the person wearing the shirt. As a company that was born and is based in Brooklyn and takes great pride in our Brooklyn heritage, we understand how this could have been confusing to some customers. These products are currently sold out, and we don’t intend to carry them again."

The customer confusion is just one reason the Brooklyn Chamber of Commerce came up with the "Brooklyn Made" stamp of approval last year.

For a small fee, businesses that make their products in Brooklyn can put the icon on their merchandise, so customers know they're getting something made in the borough.

While Brooklyn Chamber President Carlo Scissura says he shops at West Elm and wants continued success for the Brooklyn company, he says "Made in Brooklyn" can only mean one thing.

"For the economy, for job growth, for people making a living wage and having health benefits and everything, if you are saying "Made in Brooklyn", you better be made in Brooklyn," said Scissura.