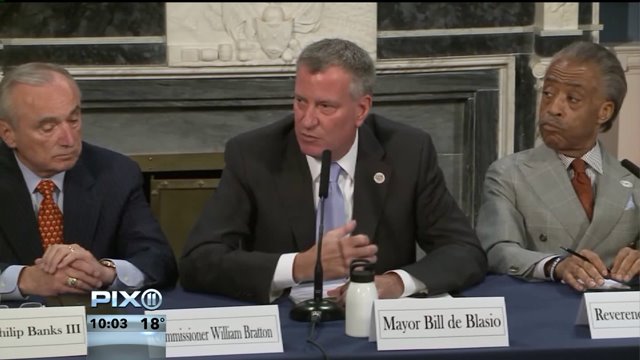 Mayor de Blasio says the the NYPD`s ban on chokeholds is enough.

NEW YORK (PIX11) – Mayor Bill de Blasio is standing by his decision to veto chokehold legislation should it reach his desk.

The takedown maneuver has been prohibited by New York Police Department policy since 1994, but is legal under city law.

Eli Brown was put in a chokehold and thrown to the ground last August by NYPD officers. His case was ultimately dismissed.

He told PIX11 News that based on that experience, he hopes the law is changed.

“I would be extremely disappointed with the mayor if he vetoes this chokehold bill because the message that he’s sending to the community and everyone in this city is, it is allowed,” Brown said.

The mayor has made his veto plans known in recent weeks, all while calling for reform within the city’s police department, especially in the wake of Eric Garner’s high-profile in-custody death in which the 43-year-old father was put in a chokehold and minutes later was dead.

The in-custody death of Eric Garner, seen here moments before he died from injuries inflicted during a chokehold on July 17, 2014, could inspire anti-chokehold legislation. But Mayor Bill de Blasio says he wouldn't sign it.

Talk of retraining and reforming NYPD policy has not been enough for some in City Council.

Councilman Jumaane Williams is one of the driving forces behind the bill. He said he understands the pushback from the mayor, but wants to keep the discussion in perspective.

“This is part of the legislative process,” Williams said. “I think it’s very premature to be talking about veto.”

A spokesman for the mayor said de Blasio stands by his plans.

“As is consistent with his previously stated views on this issue, the mayor would veto the chokehold bill as it is currently drafted were it to reach his desk,” de Blasio’s office said.

When asked what wording would be required for the legislation to earn the mayor’s signature, de Blasio’s office did not respond.

Williams has a theory.