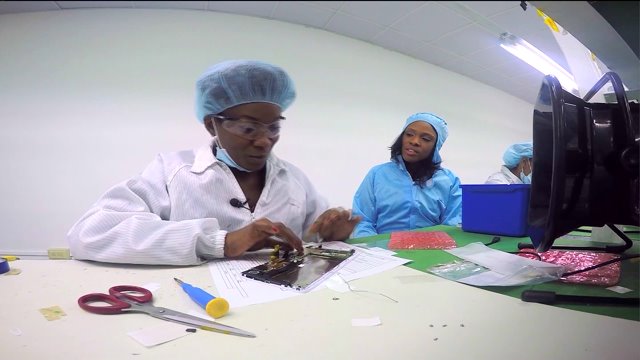 In a place known for political corruption, poverty and a massive earthquake -- Surtab is the high tech hope of Haiti.

PORT-AU-PRINCE, Haiti (PIX11) -- In a place known for political corruption, poverty and a massive earthquake -- Surtab is the high tech hope of Haiti.

The Surtab factory opened in Haiti's capital three years after the earthquake.

The vision was to create good paying jobs and bridge the digital divide. Today, they build Android tablets.

"Everything is done by hand," Josab Sanon, a manager at Surtab said. "What is special with this kind of manufacturing, every worker makes the tablet from A to Z."

Their product rivals the iPad Mini and Samsung Galaxy.

Every unit is inspected three times and tested for durability. Then they are packed up and shipped around the world.

"For the packaging, we could have chosen a gift box," Sanon explains, "but we chose instead a box that is made of recycled material."

At Surtab, building a tablet is a precise and delicate art. Everyone has to first suit up in protective gear.

Employees must take a 10 second air shower to remove any dust or dirt, then they can step inside the production room.

Because most Haitians only have a basic level of education, Surtab hires people based on their performance on dexterity and psychological tests -- and the salaries here are three times the average for a manufacturing job in the country.

Farah Tilus, a Surtab employee says "it’s a great opportunity to work here and theres not much job like this in Haiti."

And incredibly, almost everyone who works here is an earthquake survivor.

"I aint never going to forget that day because I thought that I was going to die," Tilus said.

And now, Farah Tilus has a new life and job what she ever dreamed.

"Who could ever think, imagine that Haiti would be one of the countries making tablets," Tilus said. "I didn't even think that ...."

And every tablet they make has three words on the back: MADE IN HAITI. A simple, but powerful statement.

"They -- people around the world always look to Haiti as a country that has gangsters, a lot of bad people, " Tilus said. "So making tablets in Haiti is a very very good thing and I can say I'm proud of making tablets."