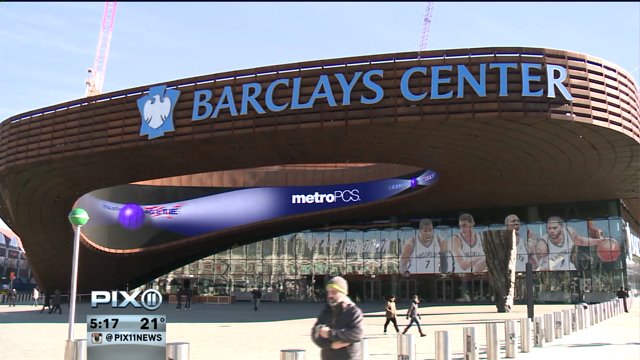 In light of tensions between Mayor de Blasio and NYPD officers, the DNC might not choose New York City.

DOWNTOWN BROOKLYN (PIX11) -- New York City may get the short end of the stick, and the ongoing dispute between Mayor Bill de Blasio and police could be at the heart of it. Some New Yorkers unrelated to the City Hall -- police discord say it's costing them money.

It's been half a year since the mayor and other New York politicos toured Democratic Party bigwigs around the Barclays Center and other landmarks around the city in an effort to attract convention leaders to New York in 2016. It's estimated that each potential host city spent $200,000 each promoting their cities.

In August, it was announced that New York was officially competing against Columbus, Ohio and Philadelphia for the nod.

That was then, though. More recent have been scenes of thousands of NYPD officers turning their backs on the mayor during funeral services for Detectives Wenjian Liu and Rafael Ramos, and the publication of a letter by Ed Mullins, the president of the police Sergeants' Benevolent Association, calling for the DNC to not come to Brooklyn because the tension between law enforcement and City Hall could compromise security.

The acts of defiance were against a mayor not thought by some officers to be supportive enough of them.

"New York, with Mayor de Blasio, and some of the people who've been around him and all the police controversies," said Baruch College political science professor Thomas Halper, regarding the DNC coming here, "New York may be too hot to handle."

He was commenting on newly released information about private investment in attracting the event that could pump up to $340 million into the area economy, according to some estimates. Bringing the DNC to New York requires the city to raise $100 million in pledges from private donors. A month ago, it had raised $15 million, according to the mayor's office. Now, a month later, the figure has barely budged to only $16 million.

Some Brooklynites told PIX11 News that they know why, and that it has an effect.

"It's very sad," said Katherine Mahoney about the ill feeling between City Hall and some rank and file police officers. "Coming from New York, from a family of policemen, that's very sad."

She was like others interviewed for this article, who said they didn't feel that the potential loss of the convention would affect them directly. However, at businesses like Yayo's Restaurant, located two blocks from Barclays Center, its owner said that not luring the convention to New York would make a trying situation even worse.

"It's not the way we thought it would be," said Geronimo Diaz, regarding his receipts since Barclays opened three years ago. He said there was a need for more hip hop and Latin music concerts, as well as other major events, including the DNC. He described his business this way, "It's not been happening like it was the first year."

Democratic Party leaders are expected to decide among New York, Columbus and Philadelphia before the month is over.