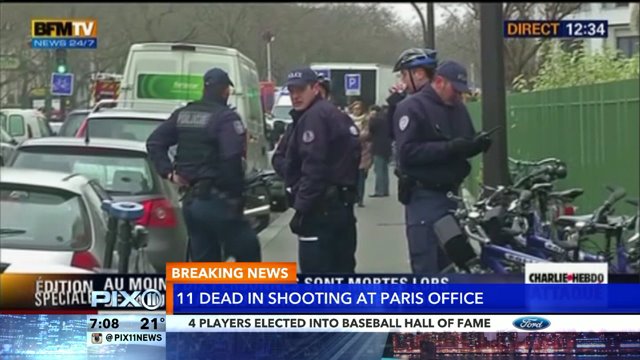 PARIS (AP) — France has raised its alert to the highest level Wednesday after gunmen stormed the central Paris offices of a satirical newspaper and killed 12 people in what is being called a terrorist attack.

Police and a witness say masked gunmen with automatic weapons attacked the offices of Charlie Hebdo, which had been repeatedly threatened for publishing caricatures of the Prophet Muhammad, among other controversial sketches.

A prosecutor said the newspaper's editor and a cartoonist are among those killed.

An official of the SBP police union said the attackers escaped in two vehicles.

In 2011, the magazine's offices were firebombed after publishing a spoof issue that "invited" the Prophet Muhammad to be its guest editor. His caricature was on the cover.

But even though the outlet had prompted threats from radical Muslims in the past, it hadn't stopped poking fun at the extremists.

Just minutes before the attack, the newspaper tweeted a cartoon in which the leader of the Islamic State group is seen giving New Year's wishes.

Another cartoon, which appeared in this week's issue, was entitled, "Still No Attacks in France." It had a caricature of an extremist fighter saying, "Just wait -- we have until the end of January to present our New Year's wishes."

"We stand with the French people in the fight against terror and defending the freedom of the press," he wrote.

The murders in Paris are sickening. We stand with the French people in the fight against terror and defending the freedom of the press.

"France, and the great city of Paris where this outrageous attack took place, officer the world a timeless example that will endure well beyond the hateful vision of these killers," Obama said in a statement.

"I strongly condemn the horrific shooting at the offices of Charlie Hebdo magazine in Paris" —President Obama pic.twitter.com/qr9zeGU04o