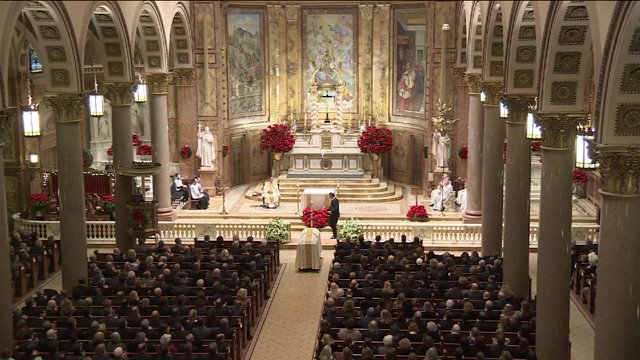 "Pop, you taught us well. We will make this state a better state -- and we will do it together."

NEW YORK (PIX11/AP) — Hundreds of mourners, family, friends and standard bearers of the Democratic Party packed a Manhattan church Tuesday for a final goodbye to one of their champions.

The two-hour funeral for former three-term New York Gov. Mario Cuomo was held at St. Ignatius Loyola Church in Manhattan. It follows a wake on Monday, in which hundreds of mourners waited in a line that stretched more than a block to pay their respects.

"At his core, he was a philosopher," said his son and current Governor Andrew Cuomo.  "He was a poet.  He was an advocate.  He was a crusader.  Mario Cuomo was the keynote speaker for our better angels."

The younger Cuomo spoke about who his father was, both in the political spotlight and at home, from his most powerful speeches to his love of basketball.

A husband of more than six decades and a father of five, Mario Cuomo was born in New York City in the apartment above his father’s grocery store. After a brief shot at a career in minor league baseball, he pursued a law degree and graduated at the top of his class from St. John’s University School of Law.

Although the allure of public service was strong, his early attempts at seeking political office ended in defeat.

In a testament to his legacy, Cuomo's death touched New Yorkers and elected officials across the political spectrum.

“Our country and our region lost a giant today with the passing of Governor Mario Cuomo,” New Jersey Gov. Chris Christie said in a statement. “He was a strong, eloquent leader who loved New York and its people. As an Italian-American, he was also a role model for future generations that anything was possible through hard work and education.”

Cuomo, 82, died Jan. 1, hours after his son Gov. Andrew Cuomo was inaugurated for a second term.

He had been hospitalized more than a month earlier to undergo treatment for a heart condition.