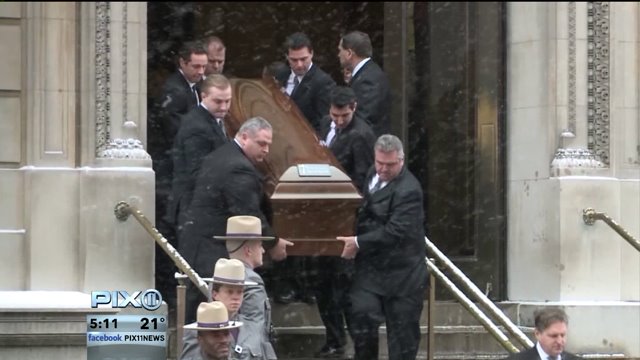 UPPER EAST SIDE (PIX11) -- As expected, some very bold-faced names in politics were on hand at former New York governor Mario Cuomo's funeral.

What was not expected was the strength of the words of his son, current Governor Andrew Cuomo, to the politically prominent attendees, and how those words were meant to resonate far beyond the church where the funeral was held.

In attendance were some of the best-known names in politics in New York and nationally, from Bill de Blasio to Bill Clinton.

Along with the banner political names were full state honors at the funeral, including the state police bagpipe and drum corps, and dozens of state troopers in full ceremonial dress, standing stock still while the falling snow accumulated on them as they saluted Mario Cuomo's state flag-draped casket.

In spite of the pomp and circumstance outside of St. Ignatius of Loyola Church, inside, Pastor George M. Witt pointed out in his homily, "Mario Cuomo had said he wanted to have a simple, hometown funeral. That would be hard to pull off." The sanctuary filled with laughter.

In fact, the first half of the nearly two hour ceremony was devoted to the former governor's faith. He was given the same funeral rites given to any devoted Roman Catholic.

But the hallmark of the second half of the service were the words of Andrew Cuomo, focusing on his father's legacy to him.

"It was a gift to have him with us this past election night," the current governor said in a eulogy that lasted a full 35 minutes. "The doctors didn't want him to go, but I insisted. Feeling him on the stage for one more fist pump, holding up his hand, I could feel his energy surge."

It was a reminiscence for a man Andrew Cuomo called "the keynote speaker of our better angels." The eulogy had a further message for the city and state from the deceased ex-governor.

"He was concerned about our city," said the current Governor Cuomo, as he began to address the recent protests over people of color dying in police custody, police officers turning their backs to Mayor De Blasio at recent police funerals, and the loss of the slain police officers themselves.

He went on to call for change based on his father's experiences with race and ethnic differences that the current governor called "New York's fault lines."

"The intelligent course, the constructive course, the responsible course," said Andrew Cuomo, "is to learn the lessons of the past tragedies, to identify the necessary reforms, to improve our justice system and to have better safety measures for police officers, and to move our city forward. And that's just what we will do. I promise you that, Pop," he said, referring to his father by his nickname.

After the casket was taken away to a private, family burial service, people who had been on the guest list to go into the funeral -- many of them banner political names -- emerged to say that the eulogy stirred them inside as deeply as they hoped it can spur action in communities in New York and far beyond.

"Andrew's remarks just... embodied the extraordinary life that Mario led," Hillary Clinton said as she left the church side by side with Bill Clinton.

"Mario Cuomo believed... we needed a strong community," the former president said. "The whole meaning of being in public service was to have the same opportunities that he did."

"Quite frankly," said congressman Charlie Rangel of Harlem and the Bronx, "listening to Andrew was like listening to his father."

Rep. Carolyn Maloney, of Queens and the Upper East Side, said that the governor's words will prompt action in her office and throughout the country. "Make this city better," she said was the message the eulogy conveyed to her. "It was inspirational."

The entire message may have been best summed up by Hank Sheinkopf, a Democratic political strategist who has worked with both Cuomo governors, starting when Andrew Cuomo was just a first grader.

"An extraordinary event," Sheinkopf told PIX11 News, "to use his father's words to tell people to stop yelling at each other."