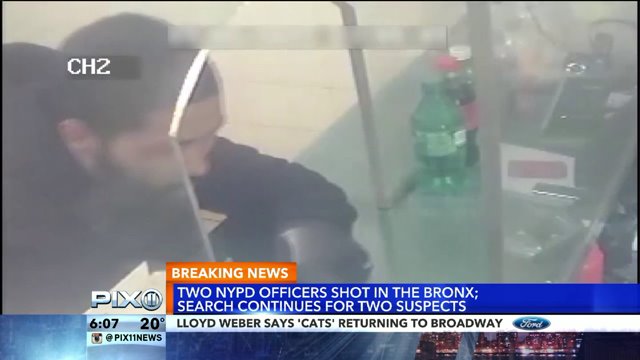 TREMONT, The Bronx (PIX11) -- Clear, close-up surveillance video released Tuesday shows one of two men wanted in connection with the shooting of a pair of New York City police officers , hurt in a shootout outside a Chinese restaurant in the Bronx.

The man seen in the video is described as Hispanic, in his late 20s, with a close-cropped beard. He was wearing dark-colored clothing at the time. Footage was taken inside a Chinese restaurant on Tiebout Avenue near East 184th Street, police said.

The plainclothes officers were part of a five-member team in the neighborhood Monday night looking for a pair of armed robbers who, about 10 minutes before gunfire erupted, stuck up a grocery store at 363 East 180th St., NYPD Commissioner Bill Bratton said.

Near the corner of East 184th Street, the officers spotted two men who matched the description of the armed robbers, Bratton said. One of those men walked into a Chinese restaurant while the other stayed outside.

As two officers approached the man standing outside, the other man ran from the restaurant and shot at the officers, who returned fire, Bratton said.

It's the second time in little more than two weeks that NYPD officers were fired upon in the line of duty. On Dec. 20, detectives Wenjian Liu and Rafael Ramos were shot and killed while sitting in their patrol car in Brooklyn.

In the chaos Monday night, two officers and possibly one of the potential suspects were hurt.

The attackers ran a block east to Marion Avenue, where they carjacked a white Camaro that was later found abandoned near East 188th Street and Park Avenue, Bratton said. A black revolver, pictured at left, was found near the car.

NYPD said 30-year-old Andrew Dossi suffered a gunshot wound to the left arm and lower back. He underwent surgery early Tuesday and is listed in critical condition.

The other officer, 38-year-old Aliro Pellerano, was shot in the chest and left arm. He is listed in stable condition.

Bratton said his officers are investigating whether a man who entered an upper Manhattan hospital suffering from a gunshot wound to the back is connected to the officers’ shooting.

A $10,000 reward has been posted for the arrest and conviction of those involved.

Anyone with information in the case is urged to call NYPD’s anonymous Crime Stoppers tipline at 1-800-577-TIPS (8477).