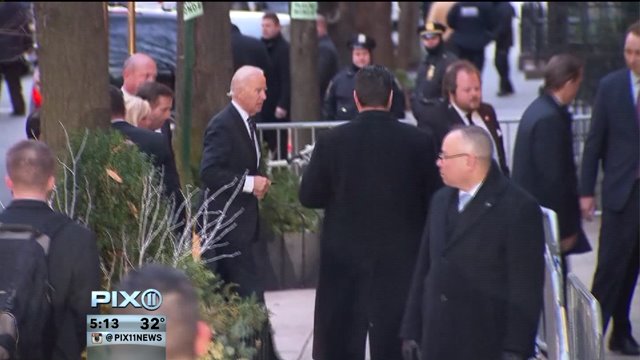 UPPER EAST SIDE (PIX11) -- They stood in line for two hours or more, in subfreezing temperatures, to pay their respects to former New York Governor Mario Cuomo, who died of natural causes on Thursday, at 82.

His funeral, scheduled for Tuesday, is open only to members of his family and their friends. Monday's wake, however, at the Frank E. Campbell Funeral Home, was open to the public. They came in droves, along with some very prominent names in politics and other fields.

Vice President Joe Biden arrived around 4:30, about a half hour before the first of two viewing periods at the closed casket wake ended.

New Jersey governor Chris Christie also attended, as well as many other boldface names in politics.

"Every argument [Mario Cuomo] made, we had to match what he was saying," said Republican congressman Peter King about his ideological opponent and friend. "He was a man of integrity. That's so different from so much of what we see today."

He was joined by many national politicians, including Senator Charles Schumer and former Sen. Alfonse D'Amato, as well as many major state government players, like assembly speaker Sheldon Silver and state senate majority leader Dean Skelos.

"The whole country is feeling this," Alda told PIX11 News, "and everybody in that room. It's a great loss."

Also, by the hundreds, everyday New Yorkers came. "It's like the Constitution says," said Patricia Tasby, a New York resident, who brought flowers. "'We the People.' He did a lot of things for the people."

They were all on hand to pay tribute the former governor and to offer condolences to his son, the current governor, Andrew Cuomo. He was joined by his partner, TV personality Sandra Lee, his two daughters, their mother, Kerry Kennedy, his visibly saddened brother, CNN news anchor Chris Cuomo, as well as their mother Matilda and other family members.

The line of mourners was substantial, extending down the block, around the corner, and all the way to the next avenue. Some people in the glacially moving line, like Ydanis Rodriguez, were city council members,

Their presence was testament to the significance of the life of the man who served three terms as governor, from 1983 to 1994.

During that time, Mario Cuomo gave the keynote speech at the 1984 Democratic National Convention. The address left such a strong impression that the elder Cuomo was thought to be a presidential contender. However, he was never quite able to throw his hat in the ring.

Mario Cuomo also boldly declared, in 1984, long before any other major political leader, that it was acceptable to be Roman Catholic and pro-choice.

And as another major figure in New York City politics pointed out as she waited in line, Cuomo took other bold political stances during his political tenure.

"He fought that death penalty every single time," said Christine Quinn, also a former city council speaker. "He was one of the few voices in Albany who knew it was inhumane."

Throughout the receiving line, in addition to well-known political names, were names who simply felt they had to be there. People like Maureen Sullivan, whom PIX11 encountered at the very end of the line.

"One of his grandchildren said he was the best grandfather anyone could ever have," Sullivan said. "That's why I'm here. Not politics."

Cuomo's funeral is scheduled to begin at 11:00 A.M. on Tuesday, at Stl Ignatius Loyola Church on Park Avenue. Former president Bill Clinton and former secretary of state Hillary Clinton are expected to attend.