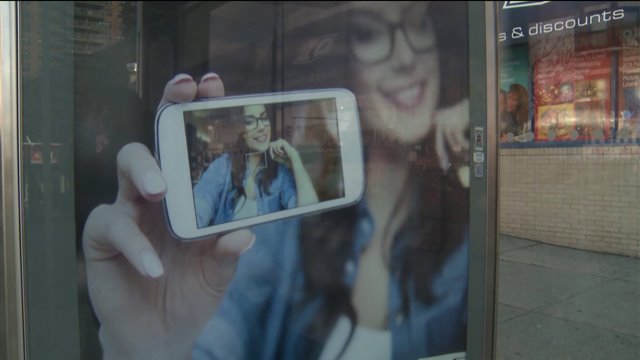 The Diocese of Brooklyn stepped out of tradition and geared the holiday ads toward tech-savvy teens.

But according to the Diocese of Brooklyn, "It's never just a selfie."

That's not the latest tag line for some sci-fi horror flick, and the ghost in the background of the selfie is actually the Holy Ghost: Jesus to be exact.

The ad is part of a holiday campaign to call people back to the Church during Christmas. Still, Carol Cox jumped when she noticed the shadowy Savior in the ad Monday.

"Jeez, I just saw Jesus in the background."

While the ad certainly grabs your attention, it's not the only one targeting teens.

The campaign also features an ad comparing mass to a night club where "Everyone's on the list."

Another references a popular cell phone ad referring to Catholicism as the "Original Friends and Family Plan." Of course it comes with "Unlimited Service."

"You know we do need young people to come into the church, otherwise the church is going to die," said Cox, a Roman Catholic. "And I do think it's important to have tradition, but I don't want this to be the tradition: selfies."

While some traditional Catholics may not agree with some of the ads, the Diocese of Brooklyn says the new campaign is in inline with the message of Pope Francis.

"These creative ads are our response to Pope Francis' call for a Church of mercy and hope, 'where everyone is welcomed, loved, and forgiven'," said Bishop Nicholas DiMarzio.

So with 1.4 million Catholics across Brooklyn and Queens that make up the Diocese, DiMarzio hopes more will take advantage of the invitation and come to mass.

But Cox says she doesn't think the ads will bring more people to the pews.

Maybe we'll just have to wait to see how many people check-in using the hashtag to find out.