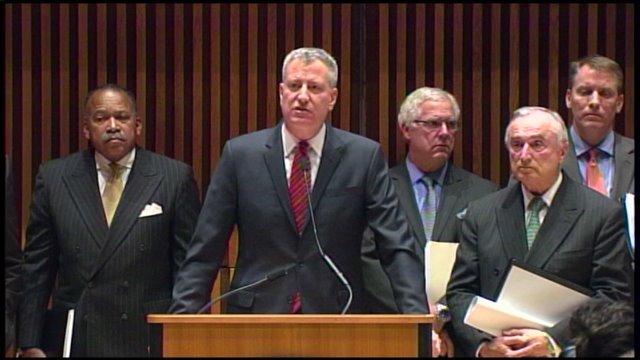 One day after hundreds of angry police officers turned their backs, yet again, during his eulogy at an NYPD funeral, a defiant and determined Mayor Bill deBlasio said his vision for a "safer city, a fairer city" is workingas he announced overall major crimes were down 4.6 percent in 2014 over 2013the first year of his mayoralty.

ONE POLICE PLAZA (PIX11) - One day after hundreds of angry police officers turned their backs, yet again, during his eulogy at an NYPD funeral, a defiant and determined Mayor Bill deBlasio said his vision for a “safer city, a fairer city” is working—as he announced overall major crimes were down 4.6 percent in 2014 over 2013—the first year of his mayoralty.

With Police Commissioner Bill Bratton standing at his side in the media conference room at One Police Plaza, deBlasio indirectly criticized the leadership of the police unions, who said their members had a right to silently voice their displeasure with the Mayor, during the funeral for Detective Wenjian Liu Sunday in Brooklyn.

“Rather than get lost in the loudest and most disrespectful voices,” the Mayor said, “let’s talk about going forward.”

deBlasio said the people of New York want to move forward, adding, “The positive visions will prevail over the negative visions that dominate the news cycle.”

The Mayor did not apologize for any statements he has made in recent months, especially those made during a speech after a Staten Island grand jury refused to indict an NYPD police officer for the chokehold death of cigarette street vendor, Eric Garner.  At the time, the Mayor said black citizens had been dealing with centuries of racism and spoke about how he cautioned his biracial son, Dante, on how to deal with police.

Just over two weeks ago, when police officers Rafael Ramos and Wenjian Liu were executed in their patrol car on a street corner in Bedford-Stuyvesant,  the president of the Patrolman’s Benevolent Association, Patrick Lynch, made a dramatic speech outside Woodhull Hospital, suggesting City Hall had “blood on its hands”.  Things have gone downhill ever since. A meeting last week between Mayor deBlasio and the five, police unions did not produce any fruitful outcome.

deBlasio rattled off impressive crime statistics at the Monday press conference, saying in 2014 the city had “the lowest number of homicides since the modern policing era began in 1993.”

The Mayor said there were 2600 fewer robberies in 2014, his first year in office, and that subway crime was down 15 percent.

Giving a nod to Commissioner Bratton and the NYPD’s top administrators—who stood with him—deBlasio said, “This leadership team is one for the ages.”

The Mayor started his speech by referencing his 2013 campaign for City Hall.

“In 2013, we had a debate in this city about the direction we needed to go,” deBlasio said, “the right path, the safe path.”

The Mayor added, “You will see these numbers make it clear it’s possible to create a safer city, a fairer city.”

DeBlasio said “In driving down crime, we’ve seen dramatic decreases in stop and frisk arrests.”  He noted there was an 11 percent decline in civilian complaints against the NYPD in 2014.

“It is the world’s greatest police department, because it’s constantly committed to getting better,” deBlasio said.