Laid to rest in shameful conditions at Queens cemetery 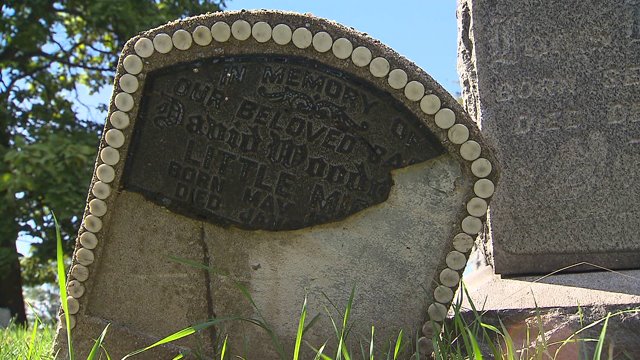 All Faiths Cemetery in Middle Village, Queens, has seen better days and relatives of those buried there want action. It`s clear there`s been little effort to maintain most of the graves, the grass around them or the roads leading to them. We went looking for the folks in charge.

Robert had been looking for the graves of his great grandmother Bertha Ressler and a great aunt Alice Degnan at the All Faiths Cemetery in Middle Village, Queens.

Robert had a map. He was following the numbers on it of where they should be. Nothing. Nothing but overturned headstones, or cracked ones or sinking ones.

The roads to the different sections of graves is full of potholes. The greenery everywhere you look is all overgrown weeds and uncut grass.
It’s clear there’s been little effort to maintain most of the graves, the grass around them or the roads leading to them.

We went looking for the folks in charge.

In the office we found Dan Austin, Jr. He’s the President of All Faiths, which, by the way, is a state-regulated cemetery.

“We’re here with Mr. Ressler. I’m Arnold Diaz. He’s looking for his great grandmother and great aunt. He can’t find them. You look around there and it doesn’t seem right. It looks terrible.”

Austin agreed. He said many of the old gravestones are falling apart because they were put in without concrete foundations.

So we asked, “Why can’t they fix them? Can’t you lift those stones up on your own?”

Then he took us to the spot where the records show, the Ressler relatives are buried. The workers turned over the headstone and there they were.

Robert Ressler is glad he finally found his relatives' graves but wonders how long their stones had been face down in the dirt.

“I’m sure my grandfather, when he bought the stone back in 1956 didn’t realize it was gonna be like this,” said Robert.

And all around us, more of the same.

I asked him why nothing can be done about this.
“What we can do is if they become dangerous, we can actually discard them.” Austin says for $830 Robert can have the stone reset. For another $925, he can guarantee perpetual care. That only means the grass will be cut.

Austin repeated there is just no money to change that.
We checked with the State Division of Cemeteries and learned that All Faiths Cemetery has almost a million dollars in its general maintenance fund. It has more than $2.5 million in its permanent maintenance fund.

The state is now investigating how that money is being used.