Chipotle apologizes after employee does ‘hands up, don’t shoot’ gesture to NYPD officers 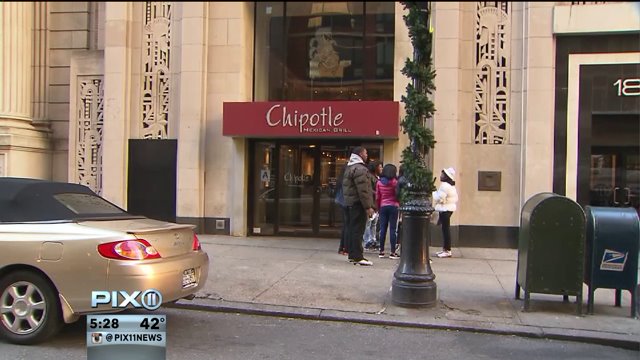 Chipotle has taken action after an employee raised her hands in protest when several NYPD officers entered the location.

BROOKLYN HEIGHTS, Brooklyn (PIX11) -- A group of NYPD officers and retired officers is calling for a boycott of all Chipotle restaurants after an incident at the Montague Street restaurant several weeks ago.

According to a spokesman for the nationwide chain, on December 16, nine police officers from the 8-4 precinct were trying to order food at this Downtown Brooklyn Chipotle when one employee raised his hands in what appeared to be a gesture of protest directed toward the police officers.

Others described it as "hands up don't shoot" gesture made famous following the police shooting of Michael Brown in Ferguson.

Cortes had been following the Facebook posts and rants about boycotting this Brooklyn Heights restaurant.

Chipotle CEOs Steve Ells and Monty Moran apologized for the incident in a statement.

“We work very hard to ensure that every customer in our restaurants feels welcome and is treated with respect.Clearly, the actions of this crew member undermined that effort," the statement said.

“We have conducted a review of the incident including interviews with the crew and a review of video footage from security cameras. Our investigation has shown that this appears to have been a spontaneous, unplanned action taken by an individual crew member and was not a coordinated effort by the staff of the restaurant.”

The statement goes on to say, "In no way was the behavior of this crew member consistent with our culture and our values as a company. We have taken appropriate actions with regard to the crew member involved, but we are not at liberty to discuss the specific actions taken."