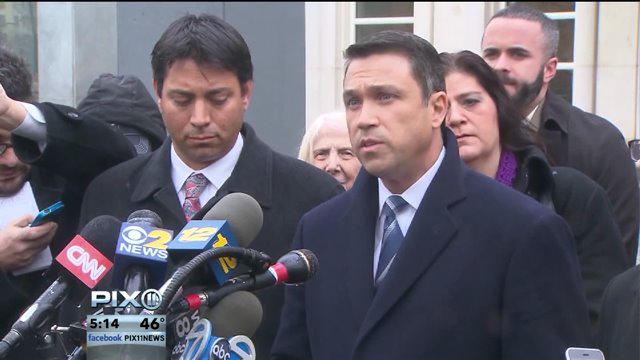 U.S. Rep. Michael Grimm pleaded guilty Tuesday afternoon in a federal tax-evasion case that he fought as he won re-election this fall.

NEW YORK (AP/PIX11) — Vowing he's stay in office while acknowledging what he did was wrong, U.S. Rep. Michael Grimm pleaded guilty Tuesday afternoon in a federal tax-evasion case that he fought as he won re-election this fall.

Grimm pleaded guilty in a New York federal court to one count of aiding in the filing of a false tax return. Sentencing is set for June 8.

He'd been set to go to trial in February on allegations he hid more than $1 million in sales and wages while running a Manhattan health-food restaurant.

In prepared comments, Grimm said he was grateful for the support of his constituents, and said he's continue to do the job he was elected to do.

He said he regrets what he did but accepts responsibility for his actions.

Sentencing is set for June 8. Prosecutors said between 24 and 30 months in prison would be appropriate; the defense estimated the appropriate sentence as 12 to 18 months.

It's not immediately clear how the plea will affect the Staten Island Republican's congressional career. In October, he said he'd step aside if he was "not able to serve."

The case stemmed from an investigation of Grimm's campaign financing. He was never charged with any campaign offense.