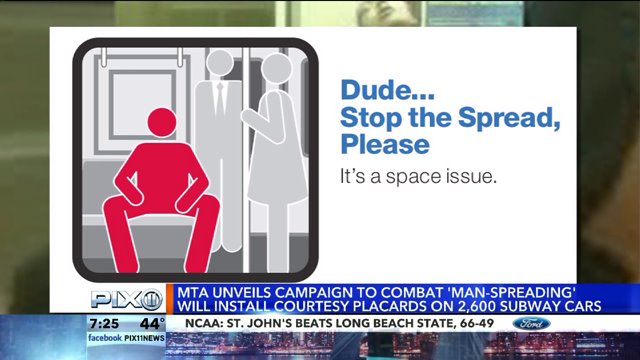 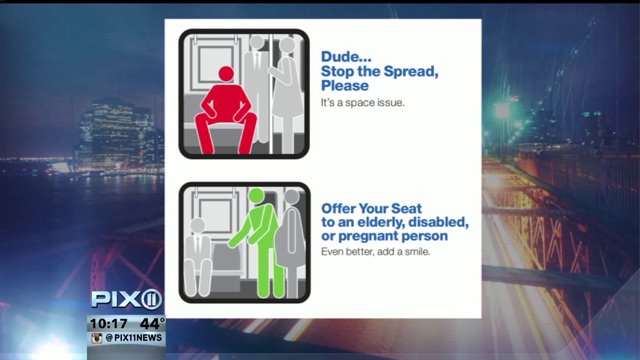 It's an act New Yorkers are all too familiar with -- commuters who sit with their legs spread out far enough to take up neighboring seats.

In an effort to raise awareness and decrease "the spread," the MTA will release a series of advertisements including one which will say "Dude...Stop the Spread, Please."

But men aren't the only ones being targeted in the new "Courtesy Counts, Manners Make a Better Ride" campaign and some riders are bothered by the suggestion that only men take up too much space. Subway blogger Eddie Going says he often sees all kinds of people behaving badly.

The MTA also hopes to raise awareness about commuters who wear large backpacks on crowded subways.

During November’s transit committee meeting, MTA board member Chuck Moerdler complained about crowding on the trains and specifically noted riders who keep their backpacks on instead of placing them on the floor.

The idea was not discussed further, but he later told PIX11 News that rather than ban backpacks, the agency should tweak its code of conduct to require straphangers to put them on the floor.

Other commuter complaints that will be addressed with colorfully designed placards include eating on the subway, pole hogging, nail clipping and loud music.

The courtesy campaign will also feature a series of advertisements for encouraged behaviors including stepping aside so others can get off and offering seats to the elderly, disabled and pregnant.

Developed by MTA Corporate Communications, the courtesy placards will be installed January on 2,600 subway cars, followed by buses and railroads.