Targeted by their uniform: The disturbing 43-year history of assassinations of NYPD cops 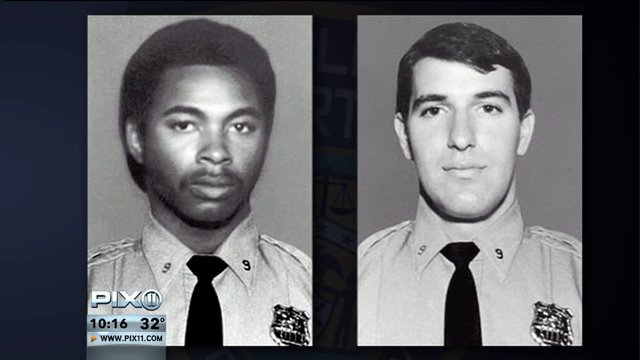 NEW YORK (PIX11) -- When an emotional, NYPD police commissioner, William Bratton, announced the execution deaths of two officers Saturday night—he noted the sad history of police partners being assassinated in uniform.  It’s happened seven times since 1971, Bratton said.  In some instances, the officer was alone, when he was targeted for wearing blue.

On May 21, 1971, Patrolmen Waverly Jones and Joseph Piagentini were ambushed from behind on a street in Harlem, during the early days of violent actions by the Black Liberation Army—which sought to create a separate country for Americans of African origin.  Jones was black, and Piagentini was white.

Piagentini’s widow noted to PIX 11 News in 2012: “The slogan of the time was a pig is a pig is a pig.  It didn’t matter if a cop was black or white.  It was the uniform,” Piagentini recounted.

In January 1972, two other officers—Rocco Laurie and Gregory Foster—were fatally shot, as they walked out of a diner in the 9th Precinct in the East Village.  Foster, 22, was black, and Laurie, 23, was white.

The Black Liberation Army fatally targeted 16 law enforcement officers around the nation, over the course of more than a decade.

And in one, racially charged incident, Patrolman Phillip Cardillo was fatally shot by someone who took his police gun inside Mosque # 7 in Harlem on April 14, 1972.

This, after four officers were beaten, when they responded to a phony 10-13 call there.

On April 2, 1978--police partners Norman Cerullo and Christie Masone of the 79 Precinct in Brooklyn stopped two men acting suspiciously near 660 Willoughby Avenue.  This is the same precinct where Officers Wenjian Liu and Officer Rafael Ramos were executed in their patrol car Saturday.  Cerullo and Masone were killed by gunfire from a 9 mm weapon.

Echoes of the BLA were heard again in April 1981, when Officers John Scarangella and Richard Rainey stopped a van in St. Albans, Queens that  matched the description of a vehicle wanted in several burglaries.  The suspects emerged from the van and pumped 30 shots into the police patrol car, hitting Scarangella two times in the head.  The 42 year old died two weeks later from his wounds.  The suspects were former Black Liberation Army members who were only convicted for attempted murder of Scarangella's partner, Richard Rainey.  Officer Scarangella had traded his evening shift for a day schedule, so that he could take his wife, Vivian, to a doctor for treatment of breast cancer.

On February 26, 1988, a lone police officer was assassinated in South Jamaica, Queens, by a different element---crack cocaine thugs.

Edward Byrne was a rookie, just 22 years old, and on the job six months.

He was guarding the home of a drug witness on Inwood Street, when four hired guns snuck up to his patrol car and one distracted him.

David McClary was convicted of being the gunman who fired five shots into Byrne’s head.

Scott Cobb, the getaway driver, gave a graphic, videotaped confession to detectives and prosecutors a week later, when he was caught with the other three.

Cobb recalled how one of his accomplices, Todd Scott, laughed at the scene, claiming he had seen the young cop’s brains get blown out.  Scott later denied that happened.

Cobb told investigators his team was paid $8,000 to carry out the hit by a jailed drug enforcer, Howard “Pappy” Mason.

Mason was enraged that he had been thrown back in prison—and that Queens drug king, Lorenzo “Fat Cat” Nichols, had been sentenced to a long, jail term.

Cobb quoted Mason:  “We lose one; they lose one.  Send a message out!”

You can watch my history of NYPD “targeted” assassinations by clicking the attached link.