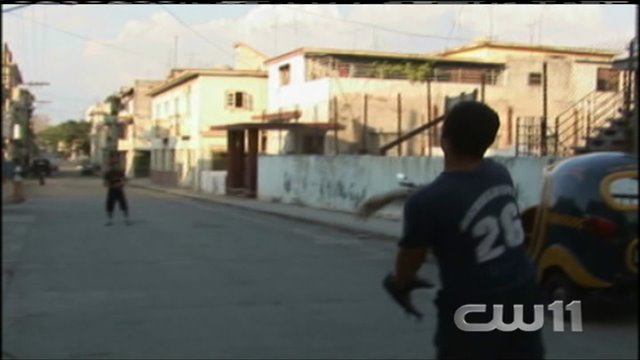 It`s clear to see when witnessing dozens of men gathered around in a heated debate in Havana`s Central Park, or a father tosses a ball made of masking tape back and forth with his son.

HAVANA, Cuba (PIX11) -- For a sport born in the U.S., the people of Cuba seem to adore the game to the point of fanaticism.

It's clear to see when witnessing dozens of men gathered around in a heated debate in Havana's Central Park, or a father tosses a ball made of masking tape back and forth with his son.

Other boys catch makeshift balls with leather gloves worn down to their skin, playing in dusty fields yelling American terms of the game like "strike","hit" and "foul!"

A pick-up game is played outside of a school honoring Communist hero Nguyen Van Troi, who was captured after trying to assassinate then U.S. Secretary of Defense Robert McNamara.

Ironically, players outside the school wear blue hats with the NY Yankees emblem. Other enthusiasts were seen wearing Yankee shirts like that of No. 26, Cuban national Orlando Hernandez Pedroso, or "El Duque."

If baseball is religion in Cuba, the Latino Americano Stadium is the cathedral.

It's the home of Havana's Metropolitanos -- "Los Metros," or we'd say "the Mets."

Cuban professional players are required to live in the provinces they play for, and are practically playing only for love -- they only make about $300 a year.