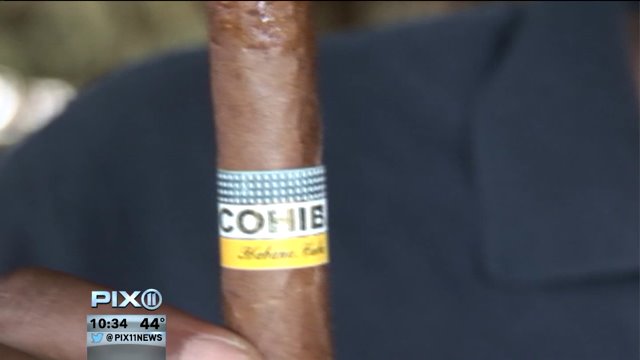 It`s rare in New York City to see the picking and curing of the tobacco that makes the cigars that consistently, in blindfold tests with smoking experts, are rated best in the world.

NEW YORK (PIX11) -- It is rare indeed for a New York City media outlet to be able to record the process of picking and curing the tobacco that makes the cigars which consistently, in blindfolded tests with smoking experts, are rated best in the world.

But PIX11 News cameras were able to do just that -- record that process of preparing cigars in Cuba.

“The big difference is the land. Cuban soil is full of oils and minerals,” said Francis Ramos, owner of Papa Juan, a cigar lounge in the Hamilton Heights section of Harlem that has no problem attracting well-known cigar aficionados, including some who know tobacco products from Cuba well.

“I was playing there when Castro overthrew [dictator Fulgencio] Batista to take over the country,” said two-time World Series champion and former Dodgers manager Tommy Lasorda, a Papa Juan regular when he’s in town from L.A.

"This is a great smoke," he said, "but nothing like Cubans, I gotta tell you."

I have to agree, even though I'm no expert, that a Cuban is unparalleled. I was lucky enough to have the real thing in Cuba a few years ago, and found it to be smooth, not harsh, and lightly, appealingly sweet.

I do not endorse smoking. However, given the chance to sample a cohiba bohique, a smoke that retails in Europe and Canada for $70 each, and which literally millions of people worldwide are eager to have, I could not pass it up. It was worth every puff.

Now that the U.S. is normalizing relations with the country that produces this world-renowned tobacco, the federal government will allow anyone granted permission to travel to Cuba to bring back with them up to $100 worth of tobacco or alcoholic products.

However, one of the country’s foremost experts on Cuba points out that this new U.S.-Cuba relationship still has many restrictions.

Cigar aficionados like Ramos, on the other hand, said, “It’s a little window that can open up a lot of doors.”