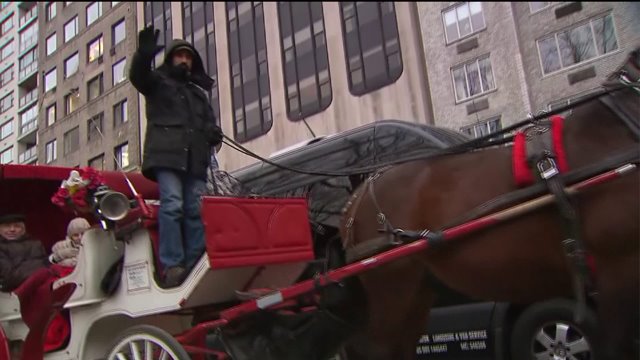 It`s an emotional and sentimental issue for so many New Yorkers -- should those horse drawn carriages be banned in Central Park?

CITY HALL, Manhattan (PIX11) -- The rallies may have lacked the star power of a Liam Neeson but the numbers were strong on both sides in dueling protests on the steps of City Hall.

"No more horses being abused," activists  chanted as they held up gruesome pictures of abused horses.

"We have had 25 accidents," City Councilmember Fernando Cabrera said, involving horses in traffic. "The time has come to do the right thing for the horses," he added as he explained his support for the city council bill.

"It'll be a cold day in hell when I give up my horse," Steve Malone, a driver, told the crowd of fellow horse carriage drivers.

The carriage drivers themselves got strong support from other labor unions in their rally. Also protesting the ban is the 18,000 member taxi workers alliance.

"We cannot give them our jobs," Bhairavi Desai, ex. Dir. Taxi Drivers Alliance said. " They can't use us at the bargaining table when we haven't been invited to the table."

The horse carriage ban bill, just introduced, will now be sent to the Labor Committee for public hearings and it could be months before there's a final vote, something that makes these tourist, who just took a carriage ride, very happy.

"It's a tradition that we hope never disappears," Chris and Jody Wikoff, tourists, from Charlottesville, said. "It's a New York Tradition."