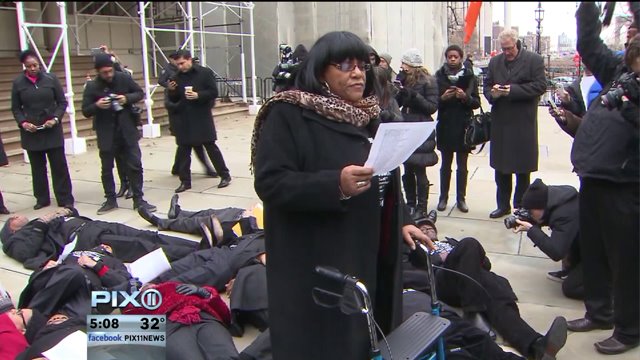 In a letter sent to Governor Cuomo, Attorney General Schneiderman formally requested that the Governor immediately issue an interim executive order now directing the Office of the Attorney General to investigate and, if necessary, prosecute cases involving unarmed civilians killed by police officers.

BROOKLYN (PIX11) -- Demonstrators converged on City Hall on Monday to conduct a die-in.  As many were on the ground arm in arm, a roll call was taken.  At one point, a familiar name that has initiated a movement over the last few days blended in with several others.

The fallout from the death of Eric Garner has been loud. It has also resonated with millions in cities across the nation.  But what about action? Rarely does change happen in an instant.  However, Attorney General Eric Schneiderman is attempting to change that: "when the trust between the police and the communities they serve and protect breaks down, everyone is at risk."

Attorney General Schneiderman is calling on Governor Andrew Cuomo to immediately issue a temporary standing order authorizing his office to investigate circumstances surrounding cases in which unarmed civilians are killed at the hands of a police officer.  It should be noted that it does not include current cases, only those after the order has been signed.  Schneiderman's rationale behind the measure, is quite simple: "Many ... have suggested that there is an inherent conflict when local district attorneys who work with police departments every day are asked to investigate members of those departments."  The temporary order would expire once the legislature in Albany acts according Schneiderman.

While many officials have embraced the AG's stance, Kings County DA Ken Thompson is against it.  DA Thompson releasing the following from his office in Brooklyn regarding the state's desired involvement in a lengthy statement: “As the duly elected District Attorney of Brooklyn, I am adamantly opposed to the request by the New York State Attorney General for authority to investigate and potentially prosecute alleged acts of police brutality. No one is more committed to ensuring equal justice under the law than I am. Moreover, acts of police brutality are not only crimes against the individual victim but also are attacks on the communities in which they occur. Therefore, local prosecutors who are elected to enforce the laws in those communities should not be robbed of their ability to faithfully and fairly do so in cases where police officers shoot, kill or injure someone unjustly. The people of Brooklyn have voted for their District Attorney to keep them safe from all crimes, including those of police brutality. The Attorney General’s proposal would override their choice – and that should not happen.”

Thompson's stance of opposition against the Attorney General is also shared by PBA President Patrick Lynch who released the following statement, "There is absolutely no reason to alter the existing system because if the rule of law and rule of evidence as they stand in the State of New York are followed dispassionately and honestly, then the outcome will be right and just regardless of what office handles a case.”