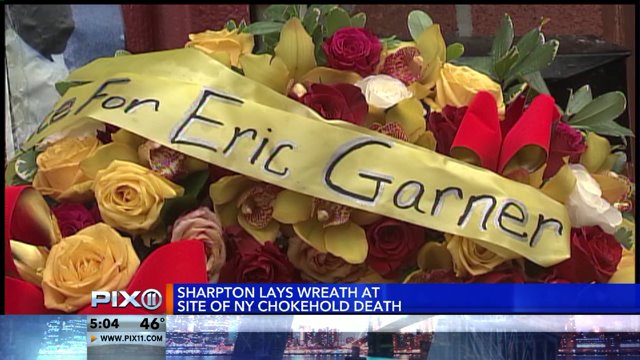 The Rev. Al Sharpton was joined by the family of Eric Garner to lay a wreath at the site of Garner`s death.

NEW YORK (AP) — The Rev. Al Sharpton has laid a wreath at a makeshift memorial for a New York man whose videotaped police chokehold death caused a national uproar.

Sharpton was joined Saturday by Eric Garner's family members as he placed a wreath at the Staten Island site where Garner died July 17.

Thousands of demonstrators have protested in New York and elsewhere since the announcement Wednesday that a grand jury would not indict a white officer in the death of Garner, a black man who gasped "I can't breathe" while he was being arrested for selling loose, untaxed cigarettes.

Sharpton is planning a march in Washington D.C., next Saturday to protest deaths at the hands of police, including those of Garner and of 18-year-old Michael Brown of Ferguson, Missouri.