Eric Garner’s family thanks supporters, asks them to remain peaceful 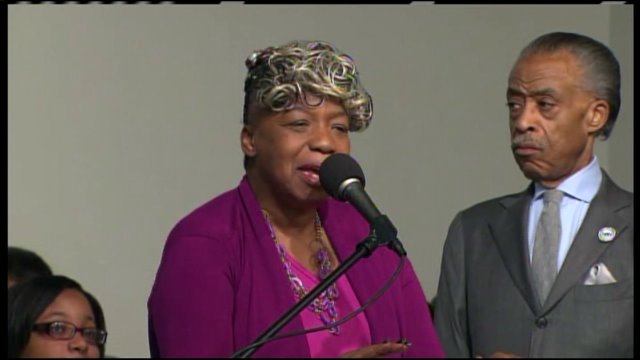 Gwen Carr, Eric Garner`s mother, thanked protestors for their support and asked that they remain peaceful in a National Action Network rally in Harlem Saturday morning.

HARLEM (AP) — Eric Garner's mother and widow say they have been overjoyed to see thousands of marchers protesting peacefully after a New York City grand jury declined to indict a police officer in Garner's choking death.

Garner's mother, Gwen Carr, said Saturday it "warmed her heart" to see so many people protesting after Wednesday's announcement that a Staten Island grand jury would not indict the police officer who choked Garner as he gasped "I can't breathe."

Garner's widow, Esaw Garner, said she saw demonstrators from her apartment window and told her son, "Look at all the love that your father's getting."

The women spoke at the Rev. Al Sharpton's Harlem headquarters.

Sharpton and Garner's family members planned to lay a wreath later Saturday at the site of his July 17 death.