Ferguson officer Darren Wilson: ‘I know I did my job right’ 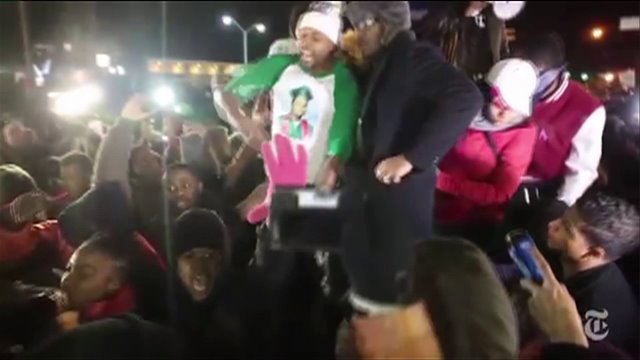 The anger and desperation was so obvious in a YouTube video posted by the New York Times.

Wilson said he couldn’t have done anything differently.

FERGUSON, Mo. (AP/PIX11) — Ferguson Police Officer Darren Wilson says he couldn’t have done anything differently in his confrontation with Michael Brown to have prevented the 18-year-old’s shooting death.

Wilson made his first public statements Tuesday during an interview with ABC News’ George Stephanopoulos. He offered details of the Aug. 9 shooting like those contained in his grand jury testimony, released a day earlier after it was decided he wouldn’t be indicted in the death.

Wilson told Stephanopoulos that Brown, who he compared to Hulk Hogan, slammed the door of his police car on him when he asked him to walk on the side of the road.

Wilson says he felt like it was his duty to chase Brown after a confrontation at his police vehicle. When asked about witness accounts that Brown at one point turned toward Wilson and put his hands up, he responded "that would be incorrect."

Brown grabbed the top of his gun, according to Wilson, and said, "You're too much of a p**** to shoot me."

Wilson says he and Brown began grappling over the gun and that he felt that if he didn't get the gun away from Brown, he would be dead.

He told Stephanopoulos he has a clean conscience because "I know I did my job right."