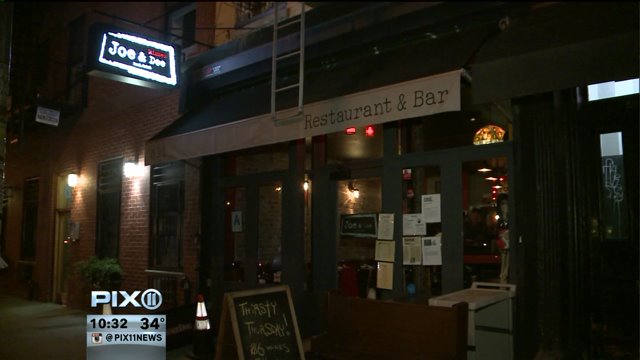 Sit down for a gourmet meal at a great restaurant. And when it`s time to pay up ...

EAST VILLAGE, Manhattan (PIX11) -- Sit down for a gourmet meal at a great restaurant. And when it’s time to pay up ...

Make a run for it! It’s the good ole dine and dash. For some it was a rite of passage. But the owner of East Village restaurant Joe & Misses Doe, Joe Dobias, says what one man did Wednesday night just wasn’t funny.

"He ate and drank for a quite a few hours and as the bar got busier and eventually he from what I understand hit the door but not to run out like the usual dine and dash."

Dobias claims this guy was so bold, he actually had a car waiting for him, a black car.

The bartender believes he used a taxi mobile app like Uber or Lyft to custom order his getaway ride -- all to avoid paying for his food and drinks.

So the restaurant sent out a tweet, hoping that if Uber or Lyft were used to help with this crime, the companies could also help track down this bill beater.

"It was a tough thing to swallow as a small business owner. We have a $93 check gone, the bartender doesn’t get a tip and this person gets away with this classic rouse with a very 2014 kind of way," Dobias said.

Dobias has not heard back from either ride share service just yet. But this comes as the complaints and concerns -- especially over Uber -- continue to stack up.

In the last few days, Uber has been criticized over the privacy policy, pricing, and even faced accusations of really rude drivers. Crisis consultant Peter Shankman says it's time for Uber to clean up their act and their image if they want to keep up their incredible growth.

"There is a lot of money at stake here and I guarantee you the big investors are very aware of whats going on and they are making some frantic phone calls tonight," Shankman said.