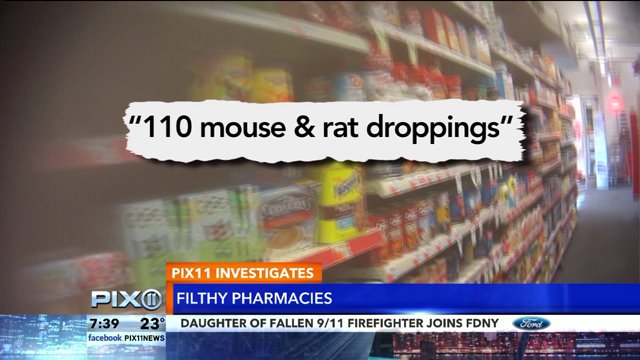 From anti-freeze to light bulbs, cough medicine to milk, they sell it all. But are they handling it all?

Patron Frank Alvite, of Massapequa, was picking up a quick lunch at Duane Reade located at Amsterdam Avenue and 59th Street. But he didn’t know other hungry creatures had been snacking inside the convenience store: mice.

“Well they're not doing a very good job at keeping the place clean,” he said. “That’s disgusting."

The Duane Reade at which he was shopping has failed three inspections and during those probes, inspectors found more than 2,000 mouse droppings. Inspectors had to destroy 30 pounds of dog food and treats were rodent defiled. They found beetles crawling on the pet food shelf likely causing contamination and in the basement, they discovered a heavily soiled toilet

The chain failed 21 inspection in the five boroughs during the one year New York State provided PIX11 with reports.

In a statement, Duane Reade said: "We take this matter seriously and  took action at the time to improve the situation in those stores."

Customers typically turn to pharmacies when they’re sick, but what’s going on behind the scenes  could land them in a doctor’s office, experts said.

“I think it’s the education level of food production and what needs to be done and having people that are vigilant check that there are no mouse droppings, that they have an exterminator there on a routine basis," sanitation expert Peter DeLucia said.

Another popular pharmacy chain, CVS touts its deals with high-paid celebrity endorsements, but there was no Hollywood glamour to the recent inspection at a Lower East Side store on Grand Street.

Inspectors found dead insects in candy boxes in the basement, another 60 dead flies, half a dozen dead roaches, and 110 mouse and rat droppings. They found either inaccurate thermometers or none at all in seven of the basement and retail level coolers and freezers.

When PIX11 asked the store’s manager if she knew about the rodent problem, she said no.

“I don’t really know. I haven’t been here for that long,” Anna Sanchez said when asked about whether they’ve been able to get the flies and roaches under control.

PIX11 then took its hidden cameras to Rite Aid on Broadway in Washington Heights, part of a chain of failures for the brand with 19 failing inspections in total for the Rite Aid Chain.

Inside, inspectors counted up 540 rat droppings, finding part of the source being a large, furry rat carcass in the basement. And even rats enjoy a good snack. Inspectors found their droppings among the Kit Kat candies, which had gnaw marks, and ordered 24 bags of the chocolate treats destroyed on the spot.

Customers say despite the filthy conditions, they frequently have no other choice of where to shop.

“if you come home late like of people do you run here, most grocery stores close earlier,” Rosa Hamer said.