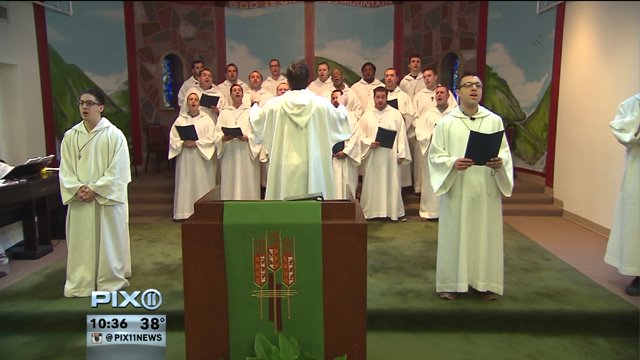 GARRISON, N.Y. (PIX11) -- When PIX11 News went inside St. Christopher’s Inn -- a shelter run by the Franciscan Friars of the Atonement -- photographer Kenton Young and I were struck by the spiritual awakenings of the heroin addicts who hoped recovery would stick this time.

Ralph survived a heroin overdose back in April, when he used almost ten bags of heroin in less than an hour.

But his 28 days in a hospital rehab weren’t enough to keep him away from the stuff that nearly killed him.

“I thought I could be a gentleman and do less,” Ralph told PIX 11 News.

St. Christopher’s Inn, on the historic Graymoor property in the hills of Garrison, New York, has 190 beds for the men seeking shelter—and a shot at redemption.

The clients are getting younger and younger.

“35 percent of our men come from Long Island,” Marianne Taylor-Rhoades, the Chief Operating Officer told us. “And a great proportion come from Staten Island.”

Fr. Drobach points out the Inn is structured in such a way that men live in the shelter, receiving free room and board, and their “outpatient” therapy across the driveway is cheaper, because their treatment program is not considered residential.

“Their home is St. Christopher’s Inn,” said Fr. Drobach, “so they get a longer time to stay in the rehab program.”

The average length of stay here is three months, although the Inn works hard to find “after care” programs for the men, the majority of them battling opioid addictions to painkillers or heroin.

PIX11 News spoke to four of the men at St. Christopher’s.

One of them, 35 year old Manny from Staten Island, has been in and out of rehab twelve times.

When we asked Manny why it never stuck, he observed, “I guess I haven’t fully surrendered.”

PIX11 met another 35-year-old man, Jared, who is the brother of a high-ranking NYPD cop.

He said he’s battled a pill addiction for twenty years and turned to heroin when there was a crackdown on painkillers.

Jared said greedy dealers were eager to “turn him on” to a bag of heroin, which gives a similar high to a painkiller.

“The first one’s always free,” he said of the dealers offering the nickel bags, which sell for $5. “Dealers are not stupid. If they get you hooked on something, you’ll always come back.”

Statewide, admissions for heroin treatment are up 136 percent and on Long Island alone, they’re up a staggering 244 percent.

Please watch Part 5 of Mary Murphy’s “Heroin: A to Z,” to witness the hope the addicts hold for their futures—even as they struggle with their cravings for heroin.