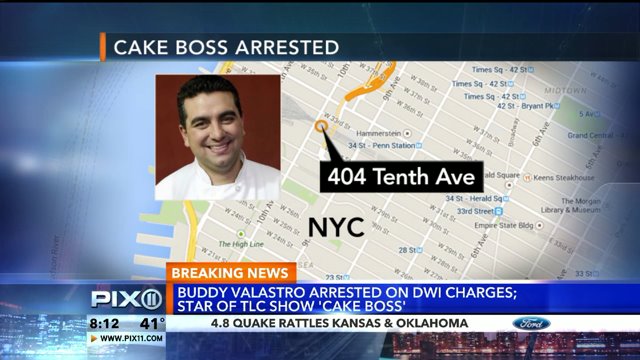 Shortly after 1 a.m., officers on DWI enforcement spotted a yellow 2014 Corvette driving erratically along 10th Avenue, swerving in and out of traffic lanes as it traveled north, according to NYPD.

They stopped the driver -- identified as famous pastry chef Valastro, whose birth name is Bartolo -- in front of 404 10 Ave. and immediately noticed a strong smell of alcohol emanating from the sports car, police said.

Valastro allegedly had a flushed face, watery and bloodshot eyes, and was unsteady on his feet when he stepped out of the car to undergo a sobriety test, which he failed, police said.

A husband and father of four, Valastro is best known as the star of "Cake Boss," a reality series that premiered on TLC in 2009 and follows the workings of Valastro's family business, Carlo's Bakery in New Jersey, which he took over when his father died two decades ago.