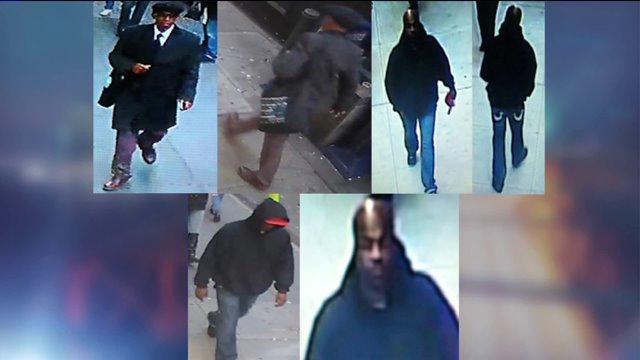 The NYPD is looking for two men who robbed a Diamond District jewelry store at gunpoint in broad daylight.

MIDTOWN (PIX11) - The NYPD is looking for two men who robbed a Diamond District jewelry store at gunpoint in broad daylight.

Emergency operators received a call around 2:29 p.m. reporting a gunpoint robbery on West 47th Street near Fifth Avenue, in the heart of the Diamond District.

Four employees told the officers that two men walked in that afternoon demanding property -- one threatened them with a gun and then pistol-whipped a 56-year-old man, leaving him with a laceration to the head.  A 27-year-old woman and two other men, 32 and 37, were in the store at the time of the robbery.

"The suspects came up to the 8th floor, suspect number one buzzed his way in, and he posed as a delivery man. Suspect number two remained in the hallway," said William Aubrey, Chief of Manhattan Detectives.

The employees complied and the two robbers fled the store.  Police searched the rest of the building and didn't find the two men.

One of the suspects was wearing a dress shirt and suit coat. The other wore a hooded sweatshirt and waited in the hallway as a lookout.

Police are using  K-9 and aviation units in the search for the suspects.

Into the evening, the police investigation continued on 47th street. Police officers stood outside the building.

The NYPD says there are numerous videos that are being reviewed right now to help find these suspects.

The male who was struck, police say, was in stable condition and went to Midtown North to talk to police in the afternoon.

It is unknown what or how much was taken from the business.