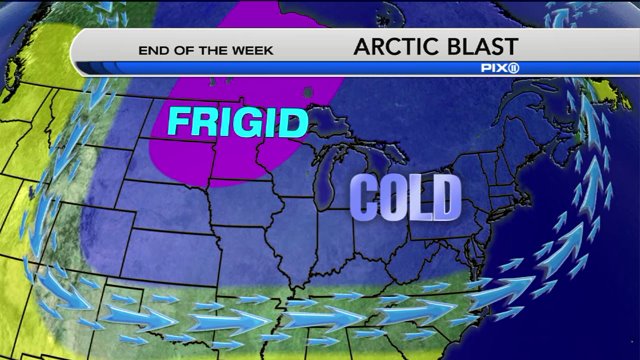 Enjoy the weather today and tomorrow because we may even see snow at the end of the week.

NEW YORK (PIX11) --  It's hard to top the first three days of this week for mild November weather.  But then, come the end of the week, everything will change.

Already, the Midwest is bracing for intense polar air, descending from Canada and Alaska, which is a radical contrast to more mild conditions that region had seen.

The New York area will also undergo see-saw weather which, although it won't be quite as frigid as the Midwest, will set the stage for some deep freezes to come in the months ahead, according to long range forecasters.

Those pleasant conditions are forecast to continue into Tuesday.  There is a slight chance of rain Tuesday night and Wednesday, but the higher than average temperatures are expected to persist through midweek.  And then it's forecast to change.

"I think we were lucky," said a tourist from New Zealand who's been in New York with his family for three weeks to train for and run the marathon.  "We were hearing about this polar blast thing that's supposed to come down from Canada or something.

He'd clearly been paying attention to the weather forecast, which showed that two-thirds of the country, including New York, will have significantly changed weather in the days ahead.  Specifically, the northern 66 percent of the country will feel the effects of a polar vortex that will move south in our direction.

In the official forecast from the National Weather Service for the week ahead, there are snowflakes in New York City.

"Just last year," weather historian Rob Frydlewicz pointed out in an interview with PIX11 News, there was snowfall in New York City on November 13th, "with an inch or two of accumulation in the New Jersey suburbs."

So the notion of mid-November snowfall, while not unheard of, is nonetheless unusual, said Frydlewicz, who runs The New York City Weather Archive blog.

Once the temperature does drop, and the flurries start to rise late this week, get ready for more for the rest of the cold weather season, long range forecaster Michael Schlacter said.

Schlacter's company, Weather 2000, has a strong record of seasonal forecasting to Fortune 500 corporations whose business models rely on weathercasting, such as energy companies.  He said that conditions at week's end are a taste of things to come.

"This winter will have some mild spells," said Schlacter, "but theyll be followed by long stretches of cold... throughout the season."