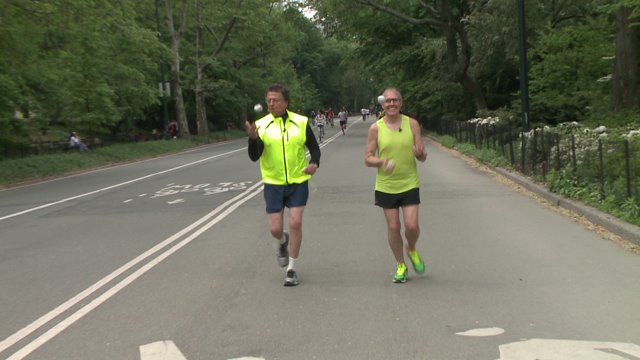 In this week`s It`s a "G" Thing, PIX11`s Mr. G heads to Central Park to meet up with a guy taking on the NYC Marathon this year- but he`s doing it with a twist.

Just another beautiful day in Central Park, where Jack Hirschowitz is doing what he loves.

“I love juggling, juggling is a passion of mine, it’s a real interest, it excites me”

An interest that started when he was a kid.

“I grew up in a small town, in a village in Africa, Namibia,” Hirschowitz said. "The only real entertainment was the circus and I got caught up in circus art”

While Jack never joined the circus, he did join juggling with another one of his passions.

“I combined juggling and running without really realizing that it’s a recognized sport called joggling," he said.

He's been joggling now for more than 20 years. Jack's competed in hundreds of races across the world. And this weekend, the 69-year-old will take on the New York City marathon for the 6th time. There's even an annual joggling championship.

“It’s one of the only events like it in the world people come together and they have races," he explained.

And Jack does it all with a smile.

“Smiling is contagious, if you're smiling, people smile back”

An attitude he also brings to his work as a psychiatrist.

“I’m role modeling for my patients what I think is important in life," he said. "Which is exercise, having fun and finding a balance”

Also, being okay with making mistakes.

“I don’t mind dropping, dropping is part of the business of joggling!"

So be sure to look for Jack this weekend crossing the finish line.