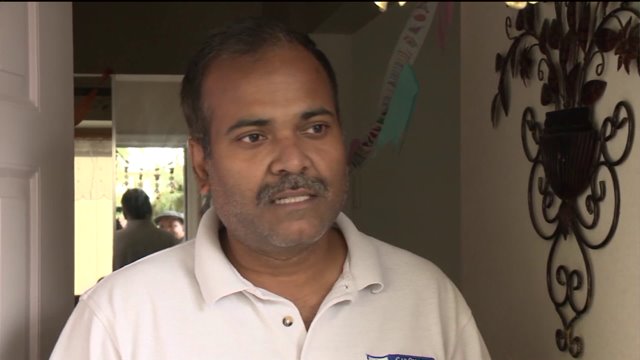 EDISON, New Jersey (PIX11) - Typically, possible hate crime incidents involve vandalism, beatings or other inexcusable and shameless, but direct offenses. Hate crime home invasions, however, are virtually unheard of, even though they are, of course, as dangerous as any other violent crime.

They are not unheard of in eastern Middlesex County, New Jersey, though, now that a fourth one has occurred in less than two weeks. All of them involve victims of similar ethnic background, who celebrate the same holiday, which the robbers may have taken advantage of.

"They just came into the house, tied us up," said Rajesh Singh, the father in the home on Netherwood Circle that was the scene of the latest home invasion. "[They] took about everything. Took away whatever we had."

Dozens of police responded to his home Thursday night, and kept returning Friday to further their investigation. They continue to search for three masked men with guns who followed Singh's wife into their home as she returned from taking out the garbage at around 10:50 P.M. Thursday. Then, at gunpoint, they woke up the couple's three children, ages 10, 11 and 13, and bound each family member with duct tape and proceeded to rob the house.

The latest home invasion has a lot in common with three other recent ones nearby.

On Tuesday, men of a similar description broke into homes in South Plainfield and Old Bridge, and tied up families and robbed them. They did the same thing at another Old Bridge home last week. All of the victims are of Indian descent, and there's another thing the crimes have in common.

"It all happened after Diwali, these incidents that we're talking about," said Singh. He was referring to the beginning of the Hindu festival of lights.

On his front porch were traditional Diwali decorations as well as strings of electric lights, next to Halloween decorations. During the Diwali festival, which is still commonly celebrated even after its five days, from October 23rd to 28th, are over, families bring out jewelry, money and other valuables from under lock and key. Knowledgeable thieves may be trying to take advantage of that, according to neighbors, who are very concerned.

"It's very discouraging for us," said Singh's neighbor Kalpit Khamar, "because we are here to celebrate, but now everybody's scared, that nobody knows what will happen next."

The Middlesex County Prosecutor's Office is handling the investigation, and has a reward for information that leads to an arrest. The prosecutor is asking anyone with information to contact its Crimestoppers Office.