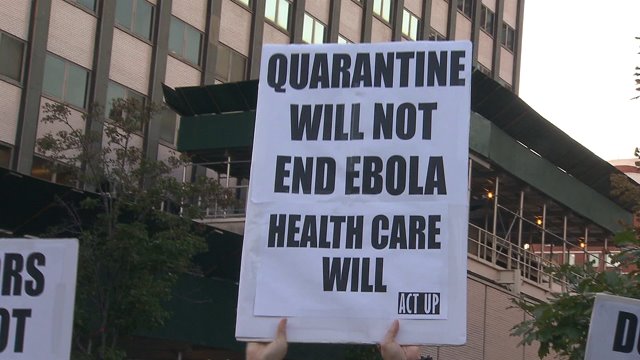 Protesters say medical professionals on the front lines should be trusted to conduct themselves according to the rules of science, not politics and fear.

NEW YORK (PIX11) -- Remember those ethical questions we began to ask earlier this month, when a government-ordered Ebola quarantine was still a possibility – and not yet a reality?

Those ethical dilemmas questions are now at the forefront of the Ebola debate, and protesters standing in front of Bellevue Medical Center Thursday evening made it clear where they stand.

In their opinion, medical professionals on the front lines should be trusted to conduct themselves according to the rules of science, not politics and fear.

“We have an abundance of evidence, going back to 1976 about the Ebola virus. We've seen thousands and thousands of cases in Africa. And we have a pretty good idea of how it’s transmitted. We've never seen any cases so far, where it’s been transmitted via casual contact,” said Annette Gaudino of ACT-UP.

So is government overstepping their power by trying to force Nurse Hickox to remain indoors? After all, she did test negative for Ebola.

All you have to do is look across the East River at the long-abandoned Smallpox Hospital on Roosevelt Island, or the rotting facility on nearby North Brother island, to recall that New York City certainly has a history of forcing people who may be a threat to the public health into isolation.

Nurse Mary Mallon, known as “Typhoid Mary,” was an asymptomatic, healthy carrier of Typhoid fever who spent nearly three decades here, in a forced quarantine, after she infected dozens of people, and refused to stop putting others at risk through her work as a cook.

Maine’s governor is now taking a hard line on the Nurse Hickox case.

“I don’t want her within three feet of anybody. Let’s put it this way. I am gonna use the legal provisions to the fullest extent that the law allows me,” said Maine Governor Paul LePage.