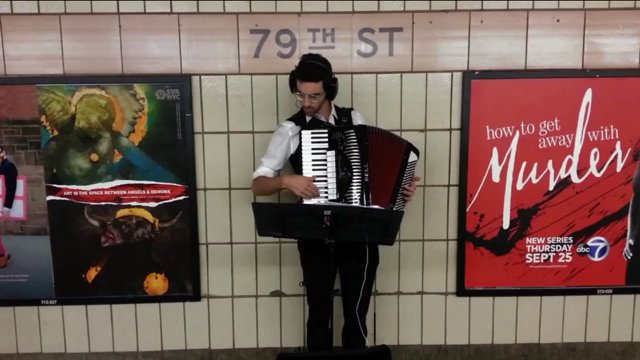 In a week that saw a controversial arrest of a subway performer which was then followed by a protest, a new YouTube video is aiming to divert the spotlight.

NEW YORK (PIX11) – In a week that saw a controversial arrest of a subway performer which was then followed by a protest, a new YouTube video is aiming to divert the spotlight.

“Signal Strength” showcases some of New York City’s most eclectic subway musicians stationed at 9 different subway stops.
What’s extraordinary about it -- the performers are connected simultaneously to a live conductor through the MTA’s recently installed WiFi.

When the all-clear is given, an underground ensemble takes flight.

The ambitious project involved a production team of 40 including a dozen musicians and countless hours of editing.
Spearheaded by filmmakers Chris Shimojima and Anita Anthonj, the goal was pretty simple: to showcase the biggest and brightest stars underground.

“You know we take the subway every day and we see a lot of interesting performers,” Shimojima told PIX11 News, explaining how the concept materialized. “You know, it was just a unique way of mixing technology, music, film and New York City.”

Both Shimojima and Anthonj handpicked the artists that appeared in the final product, a process Anthonj says was one of the first steps in production.

“We went underground and we talked to subway musicians and we listened to them and if we liked them we went up to them,” she said. “Everyone in the film we loved and we were very happy with how it ended up looking.”

An integral part of that team was seasoned conductor ljova who has collaborated with artists like Yo-Yo Ma and Jay-Z to name a few.
Composing the piece for the project proved to be a grueling task considering there was never a formal rehearsal and the day of production was the first time the ensemble played together.

“When I was writing it I would watch every performer and find that one magical thing that they do and I tried to put that in the piece face forward,” he said.

During production of “Signal Strength” – which happened in mid-September – no performers were arrested. It wasn’t necessarily a concern for producers but was something they gave thought to considering recent clashes underground between performers and the NYPD.

“What’s great about our project is that it really unites a diverse group of musicians and brings them together to show what kind of great art can be made on the subway,” said Shimojima.

Hopefully the NYPD is watching.