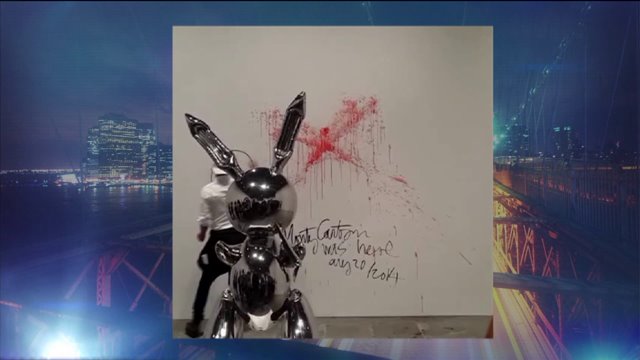 A Canadian artist, known as Monty Cantsin, is out of a mental hospital after he defaced a wall at the Whitney Museum.

Artist Jeff Koons poses next to his sculpture titled “Play-Doh” during a press preview of “Jeff Koons: A Retrospective” a exhibition of his work at the Whitney Museum of American Art June 24, 2014. (Getty Images)

NEW YORK (AP) — Police say a vandal has marred the walls of New York City’s Whitney Museum of American Art for a second time in two months as it prepares to move.

Police say Christopher Johnson spray-painted graffiti on a blank wall at about 12:30 a.m. Sunday. It happened during a 36-hour marathon public farewell to the Whitney’s current building and to a Jeff Koons exhibition.

Johnson was arrested on criminal mischief and other charges. The 33-year-old is awaiting arraignment. It’s unclear whether he has a lawyer, and no telephone number for him can immediately be found.

A museum spokeswoman says no art was damaged. The wall has been repainted.

In August, another man splashed a red substance on another wall in the Koons exhibit. He was taken to a hospital for evaluation.