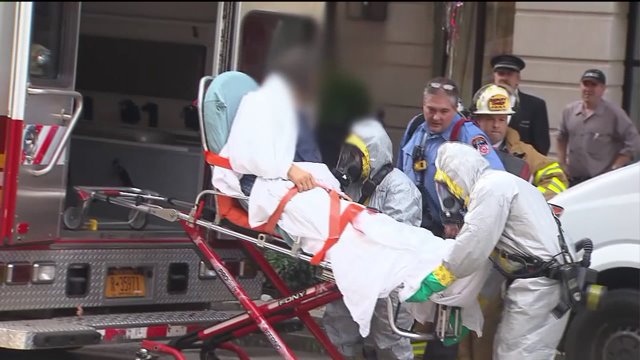 With all this talk about Ebola, a lot of people are wondering if this over-abundance of caution is the new normal.

UPPER EAST SIDE, Manhattan (PIX11) -- Bodily fluids were reportedly involved as well as a possible recent trip to a west African country, so when city EMTs responded to an emergency call on Thursday afternoon, they showed very clearly what an abundance of caution looks like now.

Their rapid but fully suited, thorough response showed firsthand how the city is trying to ensure that it answers calls that potentially involve Ebola in a manner that's most likely to prevent the virus from spreading.

The scene at 503 Park Ave. looked straight out of the movie Outbreak. EMTs covered head to toe in hazmat suits with airtight helmets transported a patient out of the building on a stretcher at around 2:30 p.m.

It is not at all clear that Ebola was involved, but the scene -- which also featured an FDNY hazmat response unit, an NYPD emergency services unit, and an FDNY deputy chief -- may be the new normal in the city's efforts to ensure that responses to possible Ebola cases do not end up like cases in Dallas, where precautions against infection proved to be ineffective in at least two cases.

According to first responder sources close to the case on Park Avenue, EMTs were called out to the building at 61st Street to answer a call of a strong odor at an apartment. When crews arrived, they found a heavy presence of bodily fluids on surfaces in the apartment. The patient may have also mentioned a possible recent trip to an African country.

It resulted in responders taking every precaution possible. That included closing off the entire block on the west side of Park Avenue between 60th and 61st streets with red hazardous materials tape, in addition to standard yellow caution tape.

Again, it does not mean that Ebola is involved. It does mean, however, that the virus's deadly potential is nothing to take lightly, as people who witnessed the scene pointed out.

"There seemed to be a large number of vehicles. That made me scared," said Jerilyn Perman, who'd just come from taking her son to the orthodontist's office when she saw all of the commotion.

Did they need "that many vehicles to respond to this?" she asked. "It was a high level of response, as I would expect from New York City."

The primary intake hospital for Ebola patients is Bellevue. A spokesperson for the city's Health and Hospitals Corporation, which operates Bellevue and the city's ten other public hospitals, told PIX11 News that Bellevue did not take in any patients on Thursday suspected of contracting Ebola.