After 29 years, man walks free for murder he didn’t commit but says justice still not served 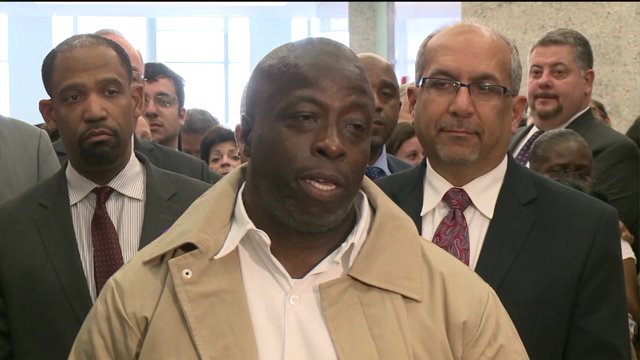 David McCallum was wrongfully convicted of kidnapping and killing a man. Despite the news, the prosecutor says justice has not been fully served.

DOWNTOWN BROOKLYN (PIX11) -- After spending nearly three decades behind bars for a murder he didn't commit, David McCallum is now a free man.

Despite his longstanding prison term finally coming to an end, both McCallum and the district attorney of Brooklyn, where he was convicted 28 years ago, said that justice still is not fully served.

McCallum, 45, was brought on Wednesday into the Kings County Supreme Courthouse at 1:45 p.m., the same way he'd been when he was first taken into custody in 1985 -- in handcuffs.

He and his friend Willie Stuckey, who died in prison of a heart attack 13 years ago, were convicted in October 1986 of the kidnapping and killing of 20-year-old Nathan Blenner.

Corrections officials removed McCallum's handcuffs before taking him into Judge Matthew D'Emic's courtroom Wednesday afternoon.  Stuckey's mother, Rosia Nealy, was asked to join McCallum and his lawyers at the defense table, as they faced the judge and made a simple plea.

"We ask that the court vacate both convictions," Oscar Michelen, McCallum's attorney, asked the court.

"I will dismiss the indictment," he said from the bench.

Immediately, there was loud applause reverberating through the courtroom.

McCallum leaned forward, with his head in his hands, and wept. Stuckey's mother put her arm around him, and began to cry herself.

"That was just pretty much just a piling up of emotions for me and, I'm sure,  everyone else who has come to know me and supported me over the years," McCallum said at a news conference minutes later, just outside of the courtroom.

He and Willie Stuckey were 16 when they were arrested on suspicion of killing Blenner. They were ultimately convicted of murder, even though their original attorneys didn't even make opening statements on their behalf.

"There's not a single piece of evidence that linked David McCallum or Willie Stuckey" to the kidnapping, the murder or the murder weapon in the case for which they were convicted, Brooklyn District Attorney Ken Thompson said.

Thompson spoke at a news conference a few hours before McCallum's hearing. Thompson said that McCallum's and Stuckey's exonerations are the 10th in the cases he's worked on in his 10 months in office. He created a unit dedicated to reexamining questionable convictions.

Thompson said his office is now reviewing at least 100 other, similar cases. He blamed his predecessor, former longtime DA Charles Hynes, for the situation. Hynes has not commented about the high number of reversals of convictions made during his tenure.

Who was commenting, though, outside of a supreme court courtroom Wednesday afternoon was the man who lost close to 30 years of his life for no good reason.

He said that he was inspired to have that attitude as a result of mentoring he'd received from Rubin "Hurricane" Carter, the prizefighter who had been wrongly convicted in 1966 for a triple murder.

Shortly before he died last April, Carter wrote an op-ed letter to the New York Daily News calling for McCallum's case to be heard again in a court of law.

"I am now quite literally on my deathbed," Carter wrote, "and am making my final wish to those with the legal authority to act.

"My single regret in life," Carter went on, "is that David McCallum of Brooklyn — a man incarcerated in 1985, the same year I was released... — is still in prison."

When PIX11 News asked McCallum's mother for her reaction to finally being able to be with her son after 28 years apart, she said that she knew the day would eventually come.  She also focused on the family of Nathan Blenner.  He died at the hands of someone, just not her son.

"I feel sorry for the person who lost their son," Ernestine McCallum said. "But I  pray and ask God that please, let them find the person who did this."

The man who did not do this, David McCallum, is now home.

Thompson said that he'd spoken with the Blenner family Tuesday night, and vowed to do all that he possibly can to find whoever killed their son.

Meanwhile, on Wednesday night, McCallum was back at the same home in which he'd lived when he was convicted of murder in high school.  His mother said that she'd baked cakes, for which she's well known, for his homecoming meal.