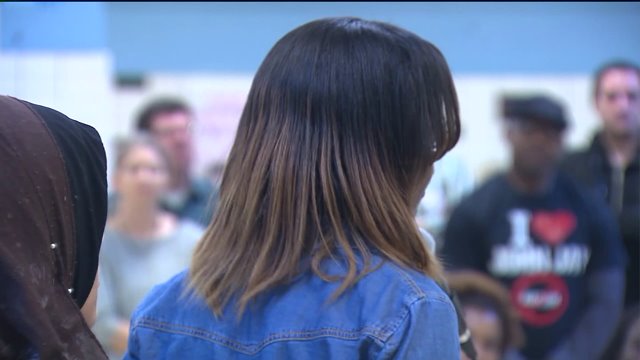 Students at a Park Slope school say they are rushed away from the building after class by cops because they are black.

PARK SLOPE, Brooklyn (PIX11) -- Sara Bennett is the woman responsible for the Town Hall meeting against what many consider racial profiling in Park slope.

The white former defense lawyer turned author and photographer said she saw two patrol cars from the 78th precinct follow a group of black teenagers on Ninth Street and Seventh Avenue on September 22nd at 2:45 pm.

"They were using bullhorns and they were telling the kids to get out of the neighborhood," Bennett told PIX 11. "I can't believe this is happening in New York City in 2014."

More than 100 students, parents, teachers and Park Slope residents attended the Town Hall type meeting, listening to mostly minority students, speak of being harassed by either school safety officers or police officers from the 78 precinct.

"Because I am dark skinned, police stopped me because a cell phone was stolen," Steven Martin, an 11th grader, told the gathering. "I have been harassed by police and my mother worries about me."

Most of the students are from Park Slope Collegiate, one of four schools here on the John Jay Educational Campus on Seventh Avenue and many say because they live in other parts of the city they feel targeted in predominantly white, upscale Park Slope.

"After listening to these student, I feel we have work to do, Lindsey Martinez, Deputy Director of School Safety for the NYPD said. "We will have future hearings."

"Our children should be able to walk in any neighborhood." Said Casey Robinson, the Co-Vice President of the Park Slope Collegiate PTA, " and not be stopped because of the color of their skin."