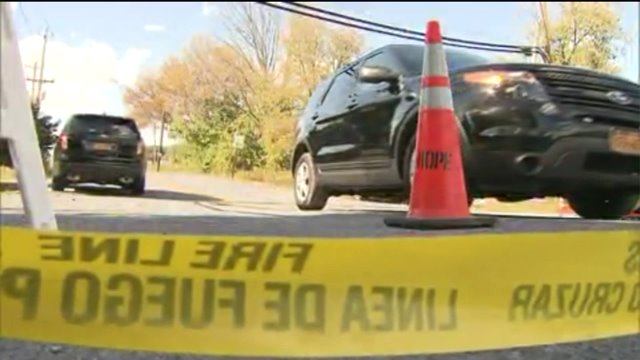 It`s a crime story that extends from Upper Manhattan to Western Orange County, 70 miles away. A man from Washington Heights released from state prison after serving a felony conviction is shot minutes later.

MOUNT HOPE, N.Y. (PIX11) -- From Upper Manhattan to Western Orange County, some 70 miles away, there's a three-agency police search underway, following the shooting of a man who had just finished serving a 15-year prison sentence and had walked out of a state facility minutes earlier.

It's located in Otisville: population 1,056.  In the sleepy village that's part of the town of Mount Hope, sights like the one at the Otisville Metro North train stop on Thursday morning are extremely rare.  There were dozens of police officers, from state, regional, and local departments, all working an attempted murder scene.

A resident who lives right at the place where the shooting took place, about 500 yards from the Metro North station, said that for the first time, she and her neighbors had to lock their doors on Thursday morning.  It was the result of the shooting, which had happened under unusual conditions.

"There was certainly one person driving, and another was secreted in the back seat of the car or the trunk," said New York State Police Captain Pierce Gallagher, at an afternoon news conference, regarding the circumstances under which the shooting took place.

Gallagher and the police chief and town supervisor of Mt. Hope said at the news conference that the shooting victim is 33 years old, and had been released from the Otisville State Prison at 9:45 a.m.  He'd been given a Metro North rail ticket to Manhattan, where he was arranged to go to a halfway house.

Prison officials were surprised to see the man get in a light colored Hyundai sedan after leaving the facility, but he did, and 15 minutes later, gunshots rang out, about 3/4 of a mile from where he'd been picked up in front of the state prison.

He was hit multiple times in his upper body, according to police, who would not reveal the victim's medical condition. They did say the man was able to speak with investigators before going in to surgery for treatment for his gunshot wounds. They also said that they expect him to be well enough for them to interview him again after his surgery.

The two men in the car sped off, leaving the victim to die.  Instead, he managed to limp the few hundred yards to the train station, where he waved down help.  A passenger at the station called 911, and the victim was taken by ambulance to a clearing, where a medical helicopter took him to a trauma center in Westchester County.

As for the shooters, there's a manhunt that covers five counties but, as the state police captain heading up the investigation pointed out,  the search is pinpointed.

That's because the shooting victim, whose name is being withheld by investigators, is from Washington Heights, in Upper Manhattan.  So, too, apparently, are his shooters.

"It's fair to say we have a very good idea who we're looking for," Gallagher said.

There's both a federal and a state prison in sleepy Otisville.  Despite that, it's common for children to walk home from school alone.  The perceived small town security in the village, leaders tried to reassure residents, has not been broken.

"There's no tie to the Mt. Hope community other than he was in the state prison," said Chief Paul Rickard of the Mt. Hope Police Department.  "We do not feel any concern in the community."

He told PIX11 that he is optimistic that there will be an arrest in the case soon.