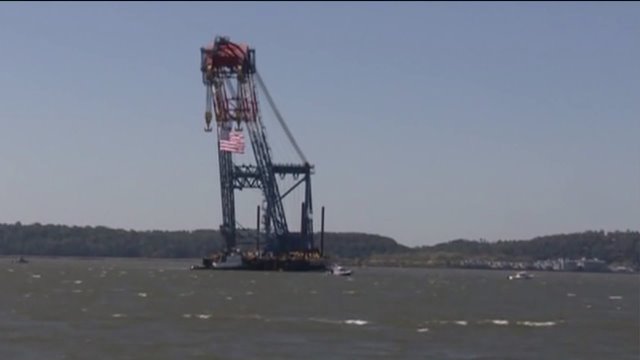 A crane floating down the Hudson River is getting a whole lot of attention.

HUDSON RIVER (PIX11) -- A crane floating down the Hudson River is getting a whole lot of attention.

That's because the "Left Coast Lifter" is now on the site to help in the construction of the new Tappan Zee bridge.

It's one of the world's largest floating cranes with an arm that stretches over 300 feet high and can lift up to 1,900 tons.

Gov. Andrew Cuomo says he's "in love" with the crane because it's saving New York a lot of money.

Governor Andrew Cuomo said the crane means a lot to him because of its service to New York:

"I've never had a deep emotional connection to a crane before ... but I want you to know I'm truly in love with this crane -- any crane that saves the state of New York over a billion dollars I love."

The Lifter has been sitting in New Jersey since January, but is normally housed in San Francisco.