Sick passenger pulled from flight at Newark does not have Ebola: Hospital 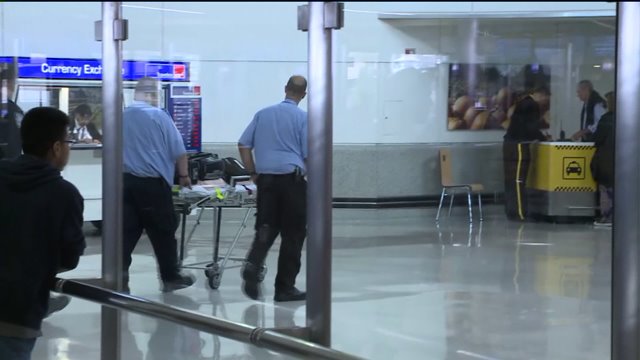 An Ebola scare forced passengers into quarantine after a man got sick on a flight from Brussels.

NEWARK, N.J. (PIX11) -- A hospital spokesperson says the sick passenger on board a United Airlines flight from Brussels that made an emergency landing at Newark Liberty International Airport on Saturday does not have Ebola.

"University Hospital in Newark, in coordination with federal, state and local public health officials, evaluated two individuals who arrived at Newark Liberty International Airport this afternoon," said hospital spokesperson Tiffany Smith. "After an examination by physicians at University Hospital, the symptoms of one individual were found to be consistent with another, minor treatable condition unrelated to Ebola. The second individual, who was travelling with the patient, was asymptomatic. The two individuals will be released with continued monitoring."

The flight made an emergency landing at about 12:05 p.m., according to FlightAware.

Medical professionals instructed that customers and crew remain on board until they could assist the ill passenger.

Officials from the Centers for Disease Control in hazmat suits took the sick passenger and his daughter off the plane.

Drama on the flight from BRU, pax taken off by CDC, we are stuck on the plane, Immigration staff now on! pic.twitter.com/fQYieQRAPK

They were taken to University Hospital in Newark where they were placed under quarantine as a precaution.

The hospital briefly would not allow emergency vehicles to drop off other patients until the two were in quarantines.

Roughly 250 passengers and the plane's crew were kept on the plane for roughly 90 minutes while the man received medical treatment.

The passengers were cleared to head through customs hours later.