[PHOTOS] 6 indicted in conspiracy to distribute heroin and meth in NYC, Pennsylvania 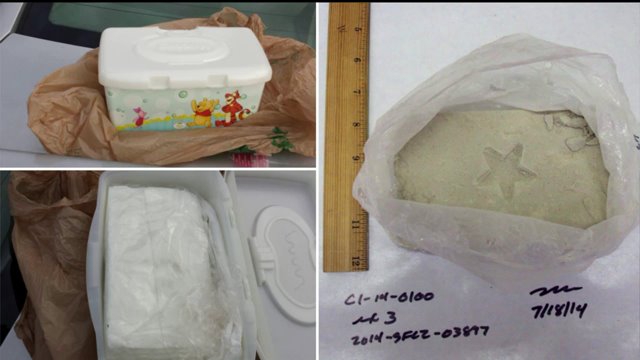 Agents arrested two men who had a bag, which contained a baby wipe container with approximately 400 grams of heroin wrapped in plastic and hidden underneath the wipes, officials said.

BROOKLYN (PIX11) -- Six people were indicted in conspiracy to distribute heroin and methamphetamine in New York City and Pennsylvania.

Nearly one pound of heroin and more than three pounds of meth were seized during a four-month investigation. Agents also recovered two pounds of lidocaine, a dilutant, from one of the suspect’s vehicles.

The investigation eventually revealed a second close associate to Solis, known as Sandra Leitong, of Colombia. Leitong allegedly served as the supplier of the meth. It is believe she obtained the drugs from Houston, Texas, which originated in Mexico.

In May, Solis and Leitong met with a man from Pennsylvania named Ricardo Salas. Following the meeting, DEA agents stopped Salas’ vehicle in Queens and found approximately three pounds and four ounces of meth, according to the office of the Special Narcotics Prosecutor. They also recovered two pounds of lidocaine. Salas was arrested on the scene.

Leitong was also arrested for distributing meth. Investigators learned afterwards that Leitong allegedly stored drugs in her home and held drug-related meetings at her residence.

In July, Solis and Castro had a plan to provide nearly one pound of heroin to Rafael Cordero, also known as “Rafy.” Cordero is believed to be a broker between Solis and subjects from Baltimore, Maryland. Agents observed Solis and Castro leave Castro’s apartment in Flushing, Queens before the plan was put into place. The pair was carrying a Babies “R” Us shopping bag.

Agents arrested Solis and recovered the bag, which contained a baby wipe container with approximately 400 grams of heroin wrapped in plastic and hidden underneath the wipes, officials said. It was also imprinted with a star, which is believed to be a marketing device to identify the product. Castro was also arrested the same day and Ramirez was arrested at the end of July in his Brooklyn residence.

Castro’s wife, Erika Ramirez, was indicted on a charge of criminal facilitation after agents seized a hydraulic kilo press, a vacuum sealer machine and vacuum sealing bags from the couple’s apartment.

“Not only were these defendants supplying heroin in Brooklyn and Queens, they also supplied three pounds of methamphetamine that was destined to destroy lives in Pennsylvania.  We have not seen that quantity of meth here, indicating that this was a major network," Kings County District Attorney Kenneth P. Thompson said in response to the arrests.

"I am pleased to work with Special Narcotics Prosecutor Bridget Brennan and DEA Acting Special Agent in Charge James Hunt to thwart those seeking to make Brooklyn a drug distribution hub.”